Cleveland's improv leaders have big plans, for a change. 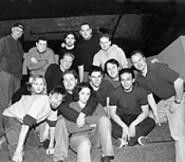 Being the city's oldest, most reliable improv troupe is busy work for Cabaret Dada. It's employed more than 50 actors and comedians since its 1995 debut. It opened the innovative Cleveland Black Box Theater. And it still packs in audiences at its West Sixth Street home. Expect the same this weekend when the troupe throws a party for itself.

Cabaret Dada's 8th Anniversary Celebration, taking place Friday and Saturday, is an open invitation "to all of the past cast members of the past eight years," says Dada's Russel Stich. More than anything, though, it's an opportunity to look back on Cabaret Dada's legacy. "For the first two years, it was just the eight original members," Stich says. "But over the last four years, the cast is bigger and is rotating more. It's a different chemistry every night."

Dada cast members have moved on to other local productions (Tony 'n Tina's Wedding, Flanagan's Wake), other cities, and other professions (one went on to direct Coors Light commercials). This weekend, many of them will return for a free-for-all improv session. "People who never really met, from the opposite ends of the Dada spectrum, [will be] working together," says Stich, who's been with Dada from the start. "There will be up to 20 members onstage at any given time. It will be a lot more chaotic and unpredictable."

The expanded troupe's repertoire packs plenty of material to fill both nights of the celebration, which also includes food, music, and cheap drinks. "It's never the same show twice," Stich says. "You may know the structures, but the content is always different. This is always changing. We're always changing.

"This is a place where you can go out and do other things and then come back. Dada is a training ground for people to launch their careers. And everybody gets to come home and play again."