Dobama Tackles Unconventional Rom-Com With a Twist in 'This' 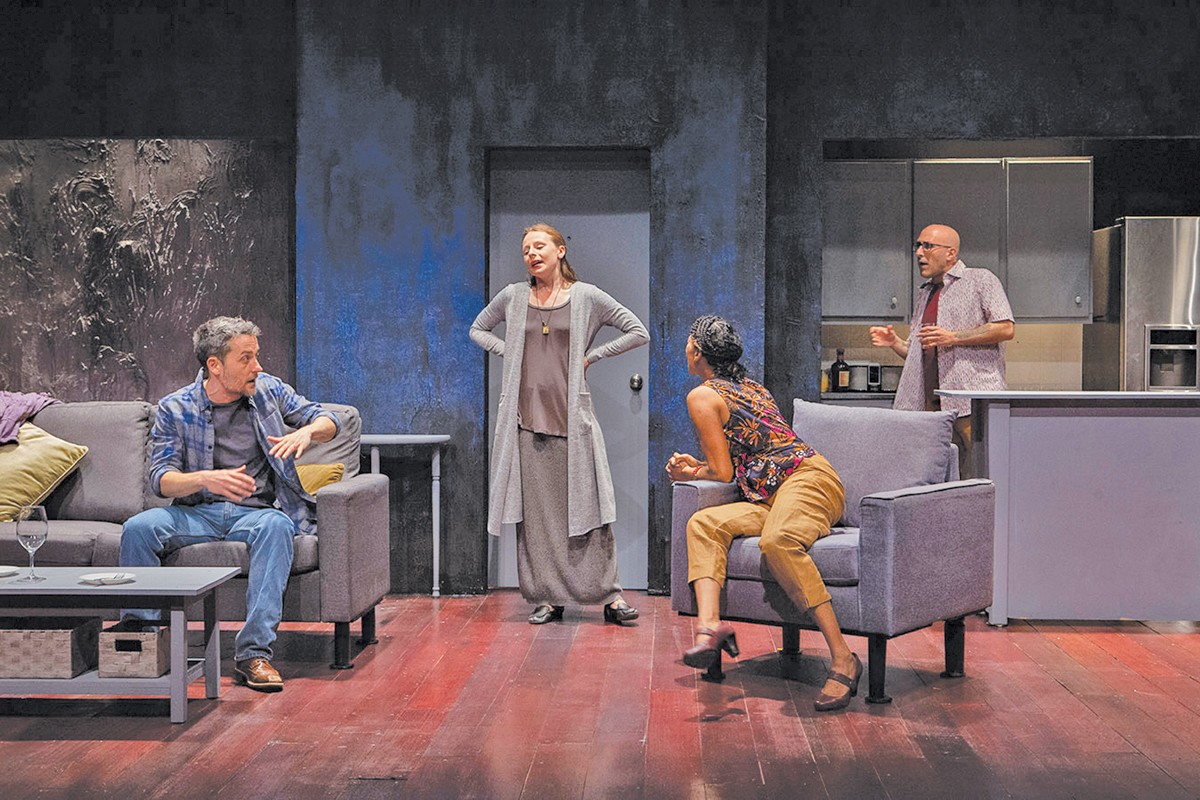 As the last production before the start of Dobama's milestone 60th season, director Nathan Motta and company have chosen a play that combines the acerbic comedy sensibilities of modern theater with a story that relays the trials and tribulations of mid-life, in their production of Melissa James Gibson's This.

On the surface, This feels like a daft name for such a complicated and emotionally conflicted play, yet its simplistic title is fitting for a piece that constantly articulates that which cannot be easily explained.

Gibson, who has shown a flair for penning tales of characters equally ready for therapy or stand-up careers with previous works like [sic], describes the titular denotation of This as the place between places, specifically events in life where people may feel directionless and unsure. That explains the characters within this story to a T.

This is especially true for Jane (Rachel Lee Kolis), who, after trying to find peace after the untimely death of her husband, finds herself attempting to unwind at a dinner party hosted by her dear friends Tom and Marrell (Abraham McNeil Adams and Treva Offutt). Trying to cheer her up, the two, along with their neurotic mutual friend Alan (Craig Joseph), play matchmaker for Jane in the form of Jean Pierre (Kieron Cindric), an individual who is French to the point of self-parody.

Combined with a party game that takes a dark turn absurdly quickly, it's enough to cause Jane to break down and leave. When Tom reaches out to apologize and console her, he shares his more intimate intentions with her. This creates a volatile environment between Jane and the few people in her life to whom she can still look for support, especially Marrell.

Meanwhile, Alan finds himself the odd man out of these looming secrets and seeks spontaneity as well as the longing to go back to the more joyous days of their friendship.

There are enough plates spinning in this tale to make a circus performer nauseated as each character learns to grow and accept how their lives have turned out, mostly to their chagrin.

Within the first few moments of the play, it's clear that This is all about the dialogue, and it's ripe with realism. The conversations reflect a group of friends who know how each other ticks and they respond accordingly, with plenty of comebacks you'll be quoting to yourself well past the car ride home.

The humor is introduced as a playful exchange between good friends. As their stories progress and further intertwine, the verbal barbs start to feel like going a few rounds with a linguistic Manny Pacquiao.

The characters focus not on the things they say, but rather how those things are said. Along with the sensibly handled mature content, This will speak to the intellectual side of any theatergoer.

The story is cinematic in nature and minimalist in execution thanks to the superb design team of Motta, stage manager Megan Mingus and costume designer Tesia Dugan Benson. They've created a space that highlights colorful, multifaceted characters upon a dreary, blue backdrop that visually drives home the key themes of grief and, to an extent, postpartum depression. The majority of the play moves at a pretty fast clip, and credit is due to Motta and company for finding a suitable pace to discern the more emotionally heavy beats of the story.

Dazzling lighting by Marcus Dana accompanies this approach by giving the various locations throughout the production their own personalities with subtle changes. It's a well-executed method that lets the viewer take in the potency of the dialogue and lets the surroundings subtly supplement the ebbs and flow of the conversation and conflict.

The production's minimalist nature hinges on the performers' abilities, and the ensemble cast truly excels at bringing this story to life. Kolis, no stranger to the Dobama stage, bares her soul as Jane and delivers equal parts wit and empathy that make her deconstruction of the single mother trope accessible to anyone, regardless of gender.

Adams, another veteran performer at Dobama, also shines as the opinionated yet meek Tom. Adams' eccentric tendencies give a delightfully quirky edge to the character.

As Tom's wife Marrell, Offutt shares a Modern Family-eqsue chemistry with Adams, as they constantly struggle with their infant child's ever-fluctuating sleep patterns. Her moments to shine carry a sobering poise, oftentimes when consoling Jane. Offutt's voice rings through the theater with a seldom-found richness in the few musical numbers she performs.

Additionally, Joseph's portrayal of the androgynous best friend hits that sweet spot between funny and endearing without leaning into the full-on stereotype.

As a high-school French teacher by day, Cindric's accent and fluent spouting of romanticisms and lust are both authentic and charming. Both Cindric and Joseph are making their debut at Dobama with this production, and they seem certain to win over audiences with their tongue-in-cheek tendencies.

With unapologetic, biting satire and a ubiquitous appeal, this self-proclaimed "un-romantic comedy" encapsulates modern theater boiled down to its most intuitive elements. With an interpretation by the Dobama staff that truly gets the point of such a dense, chaotic script, This is something you surely won't want to miss.