The quilting-as-life metaphor works, but not at warp speed. 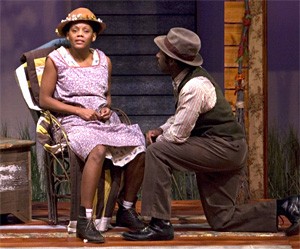 Sadie (Erika LaVonn) and Macon (Wendell B. Franklin) catch a breather between decades.

When you think about quilters, as Cleveland Play House's Gee's Bend invites you to do, you ponder the mystery of how colorful quilts can be stitched together from simple, often worthless scraps of material. Then, if you're feeling particularly thoughtful, you might muse on how quilts can resemble life itself — with individuals sewing meaningful existences together from the random pieces of their lives.

But beware the lure of the easy metaphor. While there is no doubt a powerful story to be told about the backwater Alabama women who made quilts that would one day hang in museums, this play ain't it.

Written by Elyzabeth Gregory Wilder, Gee's Bend makes the almost-always-fatal decision to cover multiple decades — in this case the 1930s through the 2000s — in 90 minutes. As a result, the audience gets the bends as the play rushes a young girl named Sadie through awkward adolescence, a pregnancy, a bad marriage, and, finally, feisty decrepitude.

Played out on an overly spacious and curiously handsome stage — considering the poor locale where the action takes place — the script attempts to encapsulate the entire scope of the civil-rights movement, with some feminist issues thrown in for good measure. The result is a well-intentioned jumble in which no characters remain the same age long enough for us to care.

The four talented actors assigned to this production do what they can with the threadbare material. As Sadie, Erika LaVonn captures the girl's awkward teenage phase. But as she matures, she never develops the warmth or depth the character needs to draw the audience into her tale.

Shanesia Davis, as Sadie's lifelong friend Nella, garners some well-deserved chuckles as a girl and woman who has no interest in quilting, and who makes fun of Sadie at every opportunity. Wendell B. Franklin and Wandachristine (it's like Cher, but with a lot more letters) ably play their respective roles as Sadie's tough-love husband and Sadie's mother (and later on, her daughter.)

Director Shirley Jo Finney keeps the pacing brisk, but allows a few clunkers, such as permitting Nella to turn into a burlesque caricature of a senior, complete with Tim Conway's old-man micro-shuffle.

Sadly, Wilder's script never delves into the intricacies of quilting, which could have been fascinating. Instead, she is content to skim across the surfaces of these potentially enriching lives at warp speed. That isn't how great quilts, or involving plays, are made.