If a fight breaks out at Jimmy's in the Flats, it must be Friday night. 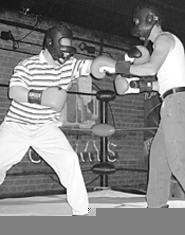 Nobody asked to see the Canadian Bad Boy's ass crack, but there'd be plenty more butt-ugliness where that came from.

It was still early evening at the fight club in the Flats, and the Sheik was already in trouble. His floppy-breasted opponent had dealt his best blows and was set to move in for the pin. Then the Sheik ensnared the Bad Boy with a lethal flip and purposefully grabbed for the trousers.

The crowd recoiled at the sudden glimpse of thong; even the guy with the bullhorn fell silent.

There are moments more athletic at the Friday Night Fights, but none that so scar an audience. And that's a good thing, because at the free weekly event at Jimmy's, the crowd is counted on to participate. Half wrestling demonstration, half amateur boxing expo, the Friday Night Fights have grown from a handful of bouts per night in early November to upwards of 25 on a recent evening.

"The first week, it didn't really catch on, and we had more wrestling than boxing," explains club owner Jim Haley. "Every week it's picked up, and more and more people are coming in."

Most fighters at Jimmy's are groomed by sparring with beers. The majority square off against friends, although a daring few accept blind pairings. Women are welcome, though few in number.

On nights when boxers are in short supply, the action centers around New Era Pro Wrestling, the Lake County group that brings the ring and a stable of doughy grapplers. There's the shaven-headed Bouncer and the towering Black Hammer, who bows his head mid-maneuver to avoid ramming the overhead air ducts. Then there's the Canadian Bad Boy: a muscle-free mound who jiggles like a Jell-O shot; his matches are best viewed on an empty stomach.

Arresting visuals aside, the best fights are turned in by the freelance boxers. Each bout consists of four one-minute rounds, and each fighter wears gloves and headgear. "Nobody's really getting hurt," says Haley, who requires all combatants to sign waivers nonetheless. "The worst that can happen is you can fall down. It's more of an entertainment thing."

Friday Night Fights is custom-built for Jason Moore and Steven Hanzak, longtime friends from Maple Heights who stumbled upon the fights by chance. They're avid wrestling fans who've honed their chops with years of Pay-per-View and backyard rumbling. And naturally, they were the first boxers to hit the ring.

"We went into it saying, 'Let's not hit each other hard,'" Hanzak recalls.

"That lasted about 10 seconds," says Moore, who took the worst of the punishment. The fight was ruled a draw, however, and Hanzak bought the next round of Bud Lights.

"It was a lot rougher than I thought it would be," he says between gasps, pausing to replenish lost electrolytes. "He hit me once and I was dizzy."

Or maybe that was just the beer.