'Sex And The City' Hits The Stage Wednesday, January 21, In I Love You Because 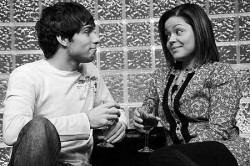 PlayhouseSquare's 14th Street Theatre brings a cast of talented locals (Ursula Cataan, Jessica Cope, Jodi Dominick, Matt Lillo, Corey Mach and Kyle Primous) to the stage for I Love You Because, a musical about two brothers and the women they date in New York. One writes greeting cards. The other is a pedicab driver. Gina Vernaci of PlayhouseSquare describes their adventures as "Sex and the City hits the stage." The intimate cabaret show is directed by Victoria Bussert, who's directed all over the country, including seven national tours, and locally at Cleveland Playhouse, Cleveland Opera, Carousel Dinner Theatre, Porthouse Theatre and Beck Center for the Arts. All of that causes us to note with a little surprise that this is the first time she's directed a show for PlayhouseSquare. This show is booked to run Wednesday, January 21 through May 17, with performances at 7:30 p.m. Wednesdays through Fridays, 5 and 8:30 p.m. Saturdays and 2 p.m. Sundays. Tickets will be $39.50-$44.50, but you can see preview performances Wednesday through the 5 p.m. performance, Saturday, January 24, for just $30. Call 216.241.6000 or go to playhousesquare.org.

Just a couple of weeks before the Grammys, pianist Leif Ove Andsnes - who for the seventh time has been nominated for an award - is coming to play with the Cleveland Orchestra at Severance Hall (11001 Euclid). He's not playing the Mozart Piano Concertos that got him the nomination, but the "Rach 3" - Sergei Rachmaninoff's Piano Concerto No. 3, the one portrayed as frightfully intimidating in the biopic Shine, during which the pianist David Helfgott has a nervous breakdown. In addition to the concerto, the orchestra will also perform Debussy's Sir�nes, from Nocturnes, and - with the Cleveland Orchestra Chorus and vocal soloists - Janacek's linguistically exotic Glagolitic Mass. "Glagolitic" refers to an early alphabet used by the Slavs. Its challenges of pronunciation (a reliable source informs us) have members of the Cleveland Orchestra Chorus referring to it as "the Gag." Soloists include soprano Measha Brueggergosman, mezzo-soprano Nancy Maultsby, tenor Stuart Skelton and bass Raymond Aceto. Performances are at 8 p.m. Thursday, Friday and Saturday. Tickets: $31-$87.50. Call 216.231.1111, or go to clevelandorchestra.com.

The late Sarah Kane's first play, Blasted, was initially considered an immature attempt to shock for its own sake. But that criticism has mellowed since the British playwright took her own life by hanging while recovering from an overdose of prescription drugs in 1999. After that, critics began to say she was a "poet" and that the play - about a rape and its aftermath, including a suicide, while a war rages outside the apartment that serves as the setting - has "a fine, moral purpose." Still, it took until October 2008 before it got its New York debut. The Bang and the Clatter brings the work to its Sometimes in the Silence Theatre (224 Euclid Ave.) for its Cleveland debut through Feb. 14. Performances are at 8 p.m. nightly, and 3 p.m. Sundays. Tickets: $15. Call 330.606.5317.

Several of Cleveland's tonier galleries, dealing with established artists and works of historical value, are gathered in the former American Greetings Creative Studios building, which is now known as West 78th Street Studios (1300 W. 78th St.). When they coordinate events, they're an artwalk unto themselves - which is the case from 5:30-9 tonight and again from 1-5 p.m. tomorrow. Kenneth Paul Lesko Gallery is showing works on paper from the Cleveland School; William Scheele's Kokoon Arts Gallery has an exhibit of works by Mexican-American pattern painter Alfredo Arreguin (which Scene critic Douglas Max Utter described as being "like prayers for a better, older place, incantations summoning lost worlds"), as well as a large-screen multimedia presentation on the painter; William Tregoning's Tregoning & Company Gallery will show new acquisitions; and Rachel Davis Fine Arts, which specializes in art from the 19th and 20th centuries, will show works on paper being sold via an online auction. Jim Snively provides music tonight. Free. Call 440.503.5506 for information.

The list of maladies addressed in MOCA's winter/spring exhibit, Superlight, could make anyone want to curl up and hide. You've got climate change, terrorism, global outsourcing, widespread poverty and African tribes killing each other over rights to the minerals that we need for our cell phones. But the artists in the show - selected from the second Biennial 01SJ Global Festival of Art on the Edge in San Jose - take up the subjects without getting bogged down in too much information or wallowing too much in the horror. The show doesn't have a guiding aesthetic, except that all the works deal with challenges we and our children will face. There's interactive sculpture, video installation and many other genres. Organized by the ZerOne Art and Technology Network, it's guest curated by Steve Dietz and coordinated at MOCA Cleveland by Margo A. Crutchfield. The show opens with a free reception from 7-10 p.m. and continues through May 10. Also opening is the work of German artist Christian Wulffen, who teaches at the Cleveland Institute of Art. MOCA is at 8501 Carnegie Ave. Call 216.421.8671 or go to mocacleveland.org. Big[BOX] Think of a solo show like a single malt: It's one actor, who's often the author of the show, and if he's good, it can be very, very good. Cleveland Public Theatre's Big [BOX] series this week offers the chance to taste two such shows: David Hansen wrote and performs And Then You Die (How I Ran a Marathon in 26.2 Years), the story of a cartoonist racing through life and New York. Alison Garrigan directs. Then Dan Folino directs Jeff Glover in Claus for a Moment, the story of Santa in the off-season - not so jolly and not really an elf. Theatergoers are cautioned not to bring little believers to this blasphemous show. Performances, in the James Levin Theatre (6415 Detroit Ave.), are at 7:30 tonight and tomorrow, and 3 p.m. Sunday. Tickets: $15. Call 216.631.2727 or go to cptonline.org

A HOUSE WITH NO WALLS

A debate rages - and not only in the African-American community - about whether America's slave history should forever be an unforgotten part of black culture or whether focusing on it in museums and history books brands people and perpetuates their victimhood. This week, Karamu House (2355 E. 89th St.) takes up the debate as artistic director Terrence Spivey directs the Midwest premiere of Thomas Gibbons' play A House With No Walls, loosely based on real events and a real museum proposal in Philadelphia. Performances are at 7:30 p.m. Thursdays through Saturdays, and 3 p.m. Sundays, through Feb. 15. Tickets: $20-$25. Call 216.795.7077 or go to karumu.com.

Pianist Richard Goode has a reputation for knowing the music he's playing and performing it with such insight that listeners come away feeling like they have a better idea what the composer meant. Born in the East Bronx, his father was a piano tuner and amateur violinist who sent the boy to piano studies when he was 6. Goode still lives in New York, though his recital and concert schedule takes him all over the world. This week it takes him to the Cleveland Institute of Music (11021 East Blvd.) for a performance at 8 p.m. in the Mixon Hall Masters Series. Tickets: $40. Call 216.791.5000, ext. 411 or go to cim.edu.

If you don't know someone onstage at Severance Hall (11001 Euclid Ave.) this afternoon, chances are you're just visiting Northeast Ohio. You couldn't live here and have no connection whatsoever to the several hundred young musicians participating in the Sixth Annual Northeast Ohio Band Invitational. Starting at 2 p.m., it's a seven-hour event that will bring a different ensemble to the stage each hour. Performers include the University Circle Wind Ensemble, Case Symphonic Winds, Cleveland Youth Wind Symphony II and guest high-school bands from Rocky River, St. Ignatius, Crestwood and Copley. Tickets: $5-$15. Call 216.231.1111 or go to clevelandorchestra.com.

The 25 song parodies featured in the Menopause the Musical come from the era of the target audience's youth, which is to say 30-40 years ago. Four women meet in a department store over a black lace bra and sing about hot flashes, memory loss, mood swings, night sweats and eating binges. How could this not be funny? Menopause the Musical returns to PlayhouseSquare's Allen Theatre for a one-week engagement. Performances are at 8 p.m. weekdays, 2 p.m. and 5:30 p.m. Saturday, and 1 p.m. Sunday through February 1. Tickets: $10-$45. Call 216.241.6000 or go to playhousesquare.com.