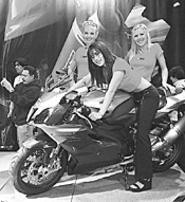 Get your motor runnin at the Cycle World International Motorcycle Show.
1/30-2/1

Real-life motorcycle men aren't like Raising Arizona's Lone Biker of the Apocalypse, prowling around and tossing grenades at bunnies. In fact, most are downright friendly. Take Nick Nichols, who likes to be called "Mr. Motorcycle." "We aren't a bunch of bungee jumpers," he says. "We are [professional] riders telling you everything you need or want to know." Mr. Motorcycle and pals will be on hand to dispense tips at the Cycle World International Motorcycle Show, happening this weekend at the I-X Center.

But it's the shiny, sexy rides that bring folks in, and nearly a dozen manufacturers will display new-model dirt bikes, cruisers, scooters, and more. "Take your time, and shop to your heart's content," advises show director Jeff D'Entremont. Exhibition extras include vintage bike exhibits, a clubhouse with contests, and discussions.

The Doc Is In
It's thugonomics for dummies at Smackdown!

Before John Cena steps into the ring to administer proper ass-whuppings to his foes, the WWE Smackdown! superstar retreats to "the Lab." That's what the 25-year-old self-anointed "Doctor of Thugonomics" calls the arena's cheap seats. In the rafters, he composes a set of in-your-face hip-hop lyrics to spit at his unfortunate opponent -- just prior to delivering his signature F-U move. Not that the six-foot-one, 248-pound, ex-college-football standout needs a stage to show off his dubious musical prowess: He recently recorded "Basic Thugonomics" for the just-released WWE Originals CD/DVD package. He and his WWE pals kick each other's butts beginning at 7:30 p.m. Tuesday at Gund Arena, 1 Gateway Plaza. Tickets are $20 to $40; call 216-241-5555. -- Cris Glaser