A look at Hollywood's obsession with obsessive psychos. 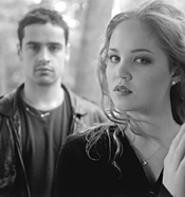 Erika Christensen goes off the deep end in Swimfan (opening Friday).
In Swimfan, Erika Christensen plays Madison Bell, a new girl in town who gloms onto the star athlete after a one-night stand. Things get ugly soon after. Madison has a lot in common with Fatal Attraction's Alex Forrest: Both have dalliances with two-timing guys, both become a bit too preoccupied with their flings, and both let their obsessions swerve into lethal territory.

But the Swimfan forebear wasn't the first film to explore a character's maddening fascination and its deadly effect. Prior to the 1987 potboiler, there had been several cinematic investigations of the subject, delivered with more subtlety and amusement. Below is a crash course in the history of the stalker flick.

Strangers on a Train (1951) -- Alfred Hitchcock was a master of obsession, and this is one of his finest variations on the theme. Two passengers meet on a train and talk about exchanging murders. One takes the discussion to heart and kills the other's wife. He then expects his new pal to honor his part of the deal. With homosexual undertones, sharp dialogue, and a riveting climax on a carousel, Train set the doomed tone for all fatal attractions that followed.

Vertigo (1958) -- Hitchcock again. This time, he places James Stewart in the middle of a complex scheme involving Stewart's recovering acrophobe, a head-turning Kim Novak, and someone who looks a lot like her. Stewart's downward spiral is convincingly frightening. When he dresses Novak exactly like her doppelgänger, his sweaty anticipation of the Pygmalion-style makeover reveals a man whose obsession has gotten the best of him.

Peeping Tom (1960) -- A young, lonely, and psychotic man brings women to his apartment, films them with his movie camera, and records their final, gasping breaths as he murders them in Michael Powell's lurid character study. Peeping Tom traces the titular character's destructive fixations to his childhood, but it doesn't make any excuses. "Do you know what the most frightening thing in the world is?" he asks his prey, moments before he kills them. You'll know the answer after seeing this cult classic.

The King of Comedy (1983) -- Robert De Niro plays Rupert Pupkin, a failed comedian who will go to any extreme to appear on a popular late-night talk show. When his attempts at getting booked on the program fall as flat as his jokes, he kidnaps the show's Johnny Carson-like host, played with oily intimidation by Jerry Lewis. Martin Scorsese's dark comedy obsesses on the obsessor, rendering the hapless Pupkin more pathetic than threatening. The scene in which he rehearses his stand-up act in his mother's basement, while she yells for him upstairs, is priceless.

Blue Velvet (1986) -- David Lynch's harrowing mystery twists the conventions of the stalker film: The fixated fellow lurking in the shadows is the movie's protagonist and, ultimately, hero. Kyle MacLachlan plays the kid at the center of it all with bug-eyed innocence and intensity. But he's not nearly so intense as Dennis Hopper's nitrous-oxide-huffing fabric fetishist, one of the most terrifying villains ever portrayed onscreen.