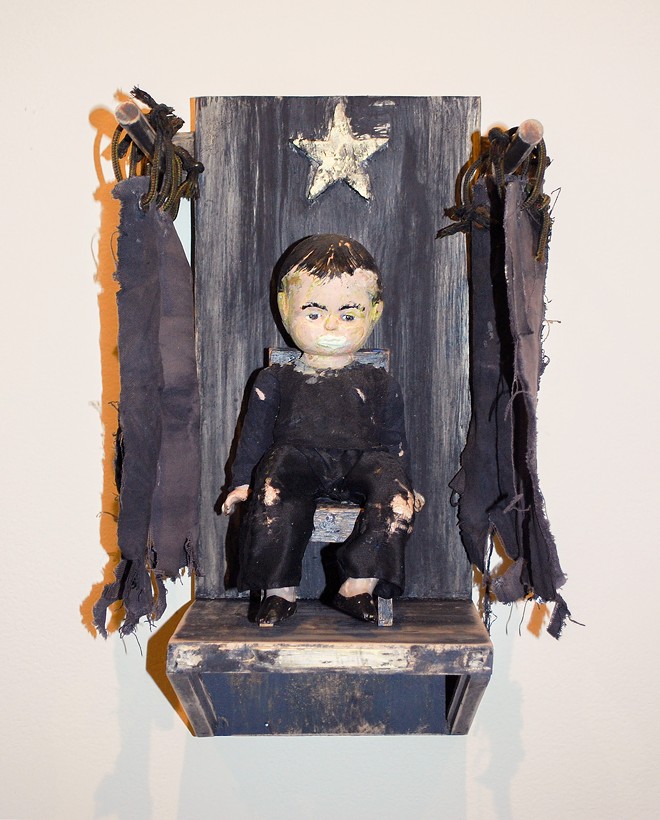 Terry Durst
The Smallest Man in the World, May 2022, Reworked doll and found material, NFS

Assemblage artists, contemporaries, friends and fellow Kent State grads Roy Bigler  and Terry Durst, who are both in the collection at The Artists Archives of the Western Reserve, come together in this inaugural exhibition highlighting their work.

An opening reception for 'The Life of Objects' is scheduled for this Thursday from 5:30 to 8:30 p.m. in the AAWR Gallery.

Consumer culture is addressed through the use of objects like buttons and bones, old dolls, antique cutlery, cowry shells, and honey combs from a variety of sources, drawing from an intermingling of history and nostalgia. Using raw materials, revitalizing discarded and transient ephemera, and allowing the historical magnetism of these items to come through help Durst and Bigler speak their truth.

As Bigler once described the process, “It’s a way of making something every day into something very special… To take an object(s) that would otherwise be destroyed and lost and prepare it as a gift! The intention is to not open the package – but if the package were to be opened, how interesting can one make the discarded object…I collect, organize, separate, take account…take stock in available materials. Ultimately, I want to know what happens when one thing is placed in, near, around something else?”

Durst and Bigler met while both attending Kent State University and remained best friends for 34 years up until Bigler’s death in 2014. While the two artists collaborated in the past, they both preferred to work on their own. Bigler’s pieces tended to be tidier, musical and balancing on historical significance while Durst’s pieces tended toward the theatrical, ethereal and dramatic. Being a film and sculpture major, cinema had a huge influence on Durst as a visual artist. These artists are clearly passionate and operated with intent, and while both used the medium of assemblage, their approach is vastly authentic and individual.

In the pieces “Time Capsule Boxes,” the variety of containers include collected and arranged objects that range from children’s Easter candy to test tubes of ash and human hair, some tightly wrapped as gifts, never intended to be opened.

Douglas Max Utter reflected in 2015 on Bigler's work: "Roy’s art was (also) a matter of gradual recognitions, of tentative sensibilities and shifting definition. He collected a stock of intriguing found objects, along with less tangible mental things — ideas, connections, boundaries, and constructed brief visual essays from the sort of hieroglyphics and portents that can be found on curbs and baseboards, tucked in the back of workshop drawers or at the bottom of storage boxes."

Originally from Wadsworth before working his way around the U.S. doing odd jobs and living in New York, Pittsburg, and San Francisco, Durst returned to Ohio and also graduated from Kent State in 1987 with a degree in in Sculpture and Film. He credits artist Robert Rauschenberg as an early influence and decided to do sculpture instead of film while his work remains dramatic and theatrical like is his recent piece, “The Smallest Man in the World,” which features a tiny reworked male doll on a bench, dressed in black with white ‘makeup’ around his mouth to suggest maybe a mask, or some kind of a gag making it impossible for him to talk.

A white star hangs above his head and he is surrounded by black curtains which seem as if they could be closed at any moment. The piece is based on a guy Durst saw at a freak show when he was young who frightened him, but Durst says as he was finishing the piece he came to the realization that the doll was him. Memory is the another main aspect informing Durst’s work which he considers to be ‘emotional rather than issue related.’

“Often the result [when I create a piece] is a metaphor for an experience, or for an emotion,” says Durst. “Ultimately, I’d much rather express an aura, or a feeling, and maybe a memory, than a platitude or piece of social criticism. I feel that my job as an artist is to investigate myself, those parts of me that I would otherwise never access. Of course, I hope through this investigation something universal will emerge.”

Both Bigler and Durst are part of a faction of artists and creatives who embodied a collective who established the Tremont neighborhood as a valuable arts community in the 1980s and '90s. Among the collective were people such as Steven B & Mother Dwarf, Beth Wolfe, Frank Green, Dan Tranberg, Terry Durst, Jeff Chiplis, Dave Madigan, Jee Sun Park and later Dana Depew. Jean Brandt should be noted here, as she ran Brandt Gallery for many years, was one of the first legitimate galleries in Tremont and started what was at the time referred to as Tremont Art Walk.