The impressionists, known for their landscapes, were good at portraits, too 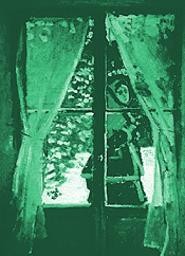 "The Red Cape, Camille Monet in the Snow," by Claude Monet, oil
Impressionist artists like Monet and Renoir didn't just paint water lilies and gardens. A bold and colorful new exhibit at the Cleveland Museum of Art, called Faces of Impressionism: Portraits From American Collections, suggests that, though we are all familiar with their talent for capturing the momentary appearances of nature, these artists also excelled at portraiture.

The show, organized by the Baltimore Museum of Art, includes 63 impressionist portraits from 30 American museums. Eight works are from the Cleveland Museum of Art's permanent collection, which, when you consider the averages, says something about the quality of the Cleveland museum's holdings. The show is a must-see event, because the scope of material is impressive, and the curatorial point of view offers much food for thought. Indeed, portraiture has traditionally been viewed as an art that defines the sitter's personal identity. Impressionist artists found their own expressive variations within this restrictive genre. Besides, the paintings are simply a feast for the eyes.

Organized chronologically, the show explores the impressionists' multifaceted approaches to portraiture. The notion that all impressionists pursued the same ideal -- the depiction of a constantly changing outdoor world -- in the same way dies hard, but die it does in this exhibit. One is struck throughout by the differences that exist between one artist and another.

For example, there is no confusing the severe but compelling portrait of model Victorine Meurent (1862) by Édouard Manet, in its sharp contours and harsh lighting, with Claude Monet's portrait of his wife Camille, dating from around 1872. The Monet work is called "Springtime," and it shows his wife resting on a grassy embankment, shaded by some foliage. The title suggests that Camille is merging with the landscape or is at one with nature, and Monet, appropriately for this theme, revels in the interaction between the pale pink light that falls upon her face and her dress with the muted greens (tinged with pink) around her. Manet is all clarity, sharpness, and objectivity. Monet sacrifices objectivity to pursue a poetic idea.

Faces of Impressionism also allows us to see the ways in which artists like Paul Gauguin moved away from an interest in the observable details of the world (a hallmark of impressionist works like "Springtime") to the idea of art as abstract pattern. After he moved to Tahiti in 1891, his work reveled in simplified shapes and two-dimensional patterns. The portrait by Gauguin in this show, a masterful work dating from 1894 (he was in Paris at the time, but in 1895 returned to Tahiti), is called "The Player Schneklud." It shows the Paris Conservatory-trained cellist playing his instrument. The cello is painted a hot orange, and elsewhere, too, the colors are vivid (the decorative shapes in the background suggest flowers or exotic fruits). The work is not about 19th-century Parisian musical life. Nor does it seem to be about probing the personality of this particular artist. Rather, the decorative shapes and the expressive colors remind one of the shifting tonal colors and carefully calibrated sonorities of a musical composition.

Combining landscape painting with portraiture (as Monet did in "Springtime") hardly sounds revolutionary, but the French academic establishment in the late 19th century strongly discouraged the practice. Artists diverged from the academic status quo at their own risk. Furthermore, the system had ways of punishing artists who disobeyed the rules. For example, it could reject paintings that mixed and matched subject matter when it came time for the annual salon shows. This atmosphere of intolerance set the stage for the artistic breakthrough that would become known as impressionism.

Sylvain Bellenger, the museum's curator of paintings, says that, in 19th-century France, artists were encouraged to respect a hierarchical ranking of subject matter. The most prestigious subject that an artist could take up was history painting (this included mythological or biblical themes). This was followed by genre painting (images of domestic life). Then there was portraiture and still lifes, and last on the ladder was landscape painting. Bellenger notes that, starting in the 1870s, many of these artists started to mix categories. The results were reviled in academic circles of the time, but are now prized. One can almost imagine Gustave Caillebotte winking at his detractors when, in his 1877 oil "Canoes on the Yerres River," he shows a group of amateur athletes gliding on the Yerres. Some scholars have noted that the central rower looks like one of the artist's friends (who, incidentally, also happened to be the first owner of the painting). Caillebotte, by combining this portrait of a fellow canoe enthusiast with a vivid evocation of the Yerres River, is blurring the distinction between individual and environment. The artist appears to be saying that there is no difference between the world out there and what lies within. In effect, the river is an individual, and the individual is a river.

Scholars like H. Stuart Hughes have argued that a revolution in intellectual history took place between the late 1870s and the turn of the century. This "new conception of reality" came about as many people began to believe that what they thought existed was more important than what did exist. Since it was becoming increasingly difficult, in the midst of the Industrial Revolution, to hold on to the notion that it was possible to arrive at decisive knowledge of human behavior, people (artists among them) would have to develop their abilities to "speculate, to imagine, to create." The new mixtures and contrasts that the impressionists favored -- in subject matter, in color choices (frequently, one can see in this show how Monet or Renoir would intensify a section of a painting by offsetting warm colors, like deep oranges, with colors like cool blue) -- seem to resonate with these shifts in human understanding. As so often with the work of fine artists, what initially appears to be simply a matter of technical know-how is actually a path leading to deeper meanings.

John House, author of the essay in the show's copiously illustrated catalog and professor of art history at the Courtauld Institute, University of London, frequently refers to the way the artists in this show "express in pictorial terms the most characteristic aspects of the individual's experience in the modern world." Here, one thinks immediately of another of Monet's portraits of his wife. This one is not as idyllic as "Springtime." In fact, "The Red Cape, Camille Monet in the Snow" (1870-'75) is a melancholic work. It confirms the show's proposition that impressionism, contrary to many heavy coffee-table books, is about a lot more than boating parties, picnics, and Sunday strolls in the park.

The work shows Camille bundled against the cold in a heavy coat and a red shawl. A door in the foreground separates us from her. Although Camille died at the age of 32 in 1879, and it's hard not to look at this work without thinking of the sadness that was to come, there is also a stoic fortitude here that discourages the mind from wandering. The heavy vertical line that divides the window in half also bisects the frame. Here once more, we have an instance where the artist appears to be proclaiming that inner and outer are connected. The window is part of the world portrayed in the painting, while the picture frame is the object that appears in the artist's studio. This use of a double frame thus emphasizes that the artist can create an alternate world in his studio. This alternate world is like the one we move about in every day, with one critical difference: The artist alone decides what happens in it.

This complex work is about many different things -- a woman alone, a viewer unable to step into the frame and open the door so that she may come in from the cold, and, finally, a meditation on the mysterious things that happen in the artist's studio, where, amid all the commercially produced pigments and oils, a whole world can be born. That world can shimmer joyously with light, and it can also brood. The same goes for this exhibition.