Designers unveil their latest collections to make money in a tanked economy. 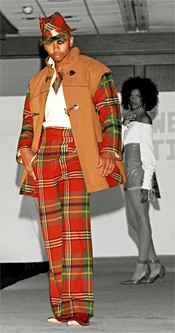 Like other professions, fashion designing has taken its share of hits in this age of out-of-control gas prices and corporate downsizing. But Cleveland's dressmakers are fighting back with tonight's Battle of the Champions II/Man-O-Man fashion competitions, where they'll showcase their new summer and autumn collections. "With the state of today's economy and the consumer conserving on spending — which, in turn, dictates the direction of future collections — the designers are now returning to the tailored, wearable, and affordable garments," says designer W. Vaughn Glover, who runs Cleveland's Waki Wear Productions. "Hats with small brims and hugging fits for both men and women are making a strong return."The show starts with the Battle of the Champions, in which invited designers compete for $22,000 in cash and prizes. It's followed by the Man-O-Man competition, with some of the nation's top fashionistos, like Cleveland's Jeffrey Graves of RaVe Fashions, Dayton's L'Amour Ameer of Lavishly L'Amour, and Baltimore's Earle Bannister Jr. of E. Bannister Couture. The winning designs are expected to feature a vibrant rainbow of tones. "An array of colors is now flooding the market in shades of blue, green, and purple, in both floral and geometric prints," says Glover. "The fall will bring you green, blue, orange, and yellow jersey, wool, and silk prints, in body-skimming attire."And today's designers are chanting a "made in the U.S.A." mantra to slash prices in fashion boutiques. "An increase in American style will replace the European flare," says Glover. "And women's knee-length to floor-length dresses, portraying the nightgown effect, will return with ruffles, bare shoulders, and slip straps, to cover the body and allow the observer to make the garment sexy in their eyes." Strike a pose at 5 p.m. today at the Marriott Cleveland Downtown at Key Center, 127 Public Square. Tickets are $30 to $40. Call 216-991-4080 or visit www.myspace.com/fashionknockout.
Sun., July 13, 5 p.m., 2008