Earthquake and friends pack on the lean, rippled laughs. 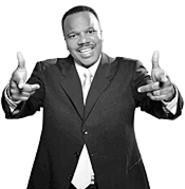 The Crown Royal Comedy Soul Festival hits town Thursday, "and it's zero percent fat," says headliner Earthquake (pictured). "I'm going to be talking about people not taking responsibility for their decisions -- like Roy, who was messing with them damn tigers. If you walk out of church and a tiger grabs your ass, then you go Awww, man. But if a man is making his living fucking with tigers, he'll get no sympathy from me."

Earth, Wind & Fire and the Isley Brothers join comedians Rickey Smiley, Adele Givens, and Bruce Bruce onstage. It's a nice mix of music and comedy, says Earthquake. Toasted with a little Crown Royal, maybe? "I've been on tour with these motherfuckers, and I haven't got a bottle yet," he says. "I should have, like, 15 of those little bags lying around here." It starts at 7:30 p.m. at Gund Arena (1 Gateway Plaza). Tickets are $37 to $57; call 216-241-5555. -- Keith Gribbins

Silent but Dandy
Old movies get new music at the Avant-Garage fest.

Saturday's Avant-Garage Film & Music Festival features short silent films given new scores by Ohio composers. The bill includes work by Buster Keaton and animated flicks from the Fleischer brothers. "It's all slapstick comedy this year," says founder Tim Lanza. "But it's not just musicians playing songs while a film plays in the background. I want to attract two audiences: people who are interested in film, but would never encounter these kinds of musicians, and the other way around." This is the last year of the decade-old Avant-Garage, says Lanza, who plans to turn his attention to screening feature-length films. The fest starts at 9:30 p.m. at the Cleveland Cinematheque (11141 East Boulevard). Admission is $8; call 216-421-7450. -- Michael Gallucci

It's more than just another literary reading when Michael DeCapite comes to town; it's a homecoming. The ex-Clevelander, who now lives in San Francisco, will read from The Italian American Reader, an anthology featuring both DeCapite and his father, Raymond, along with 60 other paisans (including beat poet Gregory Corso, postmodernist Don DeLillo, cultural theorist Camille Paglia, Godfather author Mario Puzo, and TV star Ray Romano). The visit will also feature music by Homeless Garden, a band featuring former Pere Ubu members Scott Krauss and Tony Maimone. Collaborations between the writers and musicians are possible, DeCapite says. "Anything can happen. People should expect to look sharp and make friends." The reading is Wednesday at 8 p.m. at the Beachland (15711 Waterloo Road). Admission is $6; call 216-383-1124. -- Fred Wright