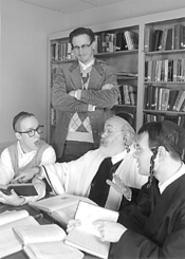 When Reuben Silver points a finger, everybody follows it.

It would be hyperbole to say that veteran Cleveland actor Reuben Silver has more talent in his index finger than most performers have in their whole bodies. Still, when he crooks that digit on the Jewish Community Center's Halle Theatre stage in The Chosen, directing a person to come closer, it's a bit surprising that half the audience doesn't wind up on stage with him. He's that commanding.

Watching Silver breathe life into the devout and dominating Reb (short for Rabbi) Saunders in the theatrical adaptation of Chaim Potok's novel is reason enough to see this production. Fortunately so, since the story itself will probably be a bit too "inside baseball" for many, delving as it does into the arcana of Talmudic interpretations and the differences (in 1944 and a few years thereafter) between conservative Judaism and strict Hasidism.

It doesn't start out all that thorny. A Herb Score-like accident on a sandlot field brings Danny, the teenage son of Saunders, together with the son of a Jewish college professor and activist, David Malter. Reuven Malter is hit in the eye by Danny's line drive, and when Danny visits Reuven in the hospital, they begin to forge a friendship, even though they come from vastly different cultural/religious segments of their largely Jewish community in Brooklyn, New York.

This memory play, narrated by the grown-up Reuven, is all about perceptions -- from the fresh outlook Reuven acquires once his eye heals to the new ways the fathers and sons learn to view each other and their individual passions. First, Reuven discovers that Danny is more contemporary than his quaint Hasidic clothing and hairstyle might imply, with Danny confessing that he secretly reads Darwin and Freud, squirreled away in a dark corner of the local library. Meanwhile, Reuven is invited over to Danny's house, where he meets the intimidating patriarch and becomes fascinated by their heated arguments over the Talmud, the ancient guidebook for orthodox Judaism.

These oddly reversed life trajectories -- with the Hasidic son a budding psychologist and the son of the knowledge-hungry professor leaning toward a religious life -- form the superstructure of the play. When David Malter starts campaigning for an Israeli state, Reb Saunders considers it a secular abomination and forbids his son from associating with the Malters. Playwright Potok and his collaborator, Aaron Posner, keep the action confined to the push-and-tug relationships among the four males (minus one permutation, since the two dads never speak to one another). This focus prevents the play from acquiring a wider relevance, since we never see how the men's choices might be affecting the women in their homes or the world at large.

The production, directed by Dorothy Silver, is thoroughly capable, but never achieves the transcendence one would hope for, given the profound subject matter. As the narrator, Larry Nehring conveys a wry, homey warmth as the mature Reuven. However, he is also called upon to play other small characters (among them, a college prof and a Little League coach), and these are just differently inflected versions of the same brassy character. The two sons are polar opposites, with intense Doug Rossi as Danny smoldering under his father's repressive and distant regime, and Sean Szaller, as the young Reuven, eager as a puppy to learn from both the dads. But these actors never fully relax into their friendship, which renders their Reb-imposed separation and subsequent rejoining less meaningful. Peering out from behind a Wilford Brimley mustache, Michael Regnier is a studiously (and somewhat stiltedly) bland Malter.

The play's title clearly references the Jews as "the chosen people," but it also alludes to the choices each of the characters make as they pass through that postwar period. And the choice Reb Saunders makes at the end, elegantly invoked by Mr. Silver, shows there is reason to hope for change, even among the most rigid true believers.