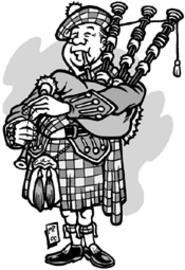 Mark Poutenis
Give a pagan a bonfire, and he'll play you a song or tell you a story. At least that's what the Nature Center at Shaker Lakes would have you believe during its Bagpipes, Bonfires, and Celtic Storytelling this weekend.

"We talk about the presence of fire and why that's so important," naturalist Mark Knapp, who will be telling the stories, explains. "[Our event] started in the fall around one of the Celtic holidays, but a lot of people felt if we had it in the summer, it'd be a lot better."

That may have made it less true to the Celtic "fire festival" that marked the autumnal equinox, but Knapp isn't too concerned about pagan faith anyway. "I don't get too much into the religious end of it," he admits. "I try to get more nature-based. A lot of the pagan holidays are Celtic, and that's part of where it came from. And a lot of people like bagpipes, so that's part of it, too."

Displaying his pipes will be Shaker Heights police officer Tim Reed, who opens the night with a brief history of the instrument and a few well-known melodies. From there, it's a tennis match between bagpipes and stories in the firelight.

"We break it up," Knapp says. "I don't sit there and drone for two hours." In fact, he doesn't even use books, relying instead on cue cards that remind him of the salient points from over 1,000 stories he has collected. "I walk around and use my hands and my whole body. I don't stand up in front of people and do nothing. [Reed] runs around in a kilt; I sit there in my uniform and sweat to death."

A slight exaggeration, of course, but same as here in America, the Celts had a penchant for tall tales. "Some of it's like a tall tale, some of it's flat-out legend. They tried to explain certain things, but their magic usually has to do with nature."

And igniting big fires to better light the sprites and imps.