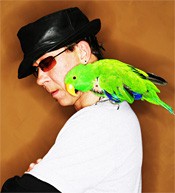 Just a day before his Australasian tour starts, DJ Chuck Love jumps on the decks tonight in Cleveland, with his pair of pet parrots at his side. The birds are no strangers to the work; one of them even spitboxes (similar to beatbox?) "C'mon!" on Love's debut double CD, Bring Enough to Spill Some. "He charged me 100 bucks and a month's supply of pizza crust for that one," jokes Love.Along with the rhythmic squawking, the discs contain 14 original cuts, with guest artists like DeMonica, Estaire Godinez, and longtime studio buddy Fourfeet. Love also plays flute, guitar, bass, keyboards, trumpet, and drums on his down-tempo tracks, (which include or including?) "Funky-Ass-Beat/Still Funky." "The challenge was to take my diverse musical background, link it to my lifelong interest in electronic music, and lock it down to the house-beat format," says Love. "The package has all of that shit."Audiences in Asia and Australia will soon find out. After performing at Spy's weekly Club Sumaridance party, Love and crew will fly to shows this week in Shanghai, Seoul, and Adelaide. On New Year's Eve, they'll play a swanky resort at Australia's Nelson Bay before a final stop on the country's Gold Coast. Despite the globe-trotting, they've managed to endure the rigors of touring. Did you mean "Despite the rigors of touring, they've enjoyed the globe-trotting"?--makes more sense with what follows. "We've also managed to fit in snorkeling the Great Barrier Reef, shopping the Grand Bazaar in Istanbul, visiting the cathedrals in Barcelona and the beaches of Brazil," says Love. "But no matter where you are, you can always find a ham-and-cheese sandwich." Love spins at 10 tonight at Spy, 1261 West Sixth Street. Admission is $5. Call 216-621-7907 or visit www.spycleveland.com.
Fri., Dec. 21, 10 p.m., 2007