Browns fans, does it help or hurt more to learn that you're paying for the NFL's mistakes? 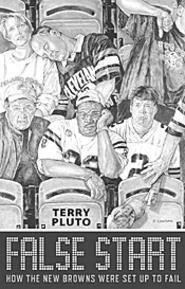 Why the Browns suck: Terry Pluto's new book gets to the bottom of our misery.
"It can't get any worse," says Terry Pluto, discussing the latest fumbles and stumbles of the Cleveland Browns. "This is probably the worst situation the NFL has ever inflicted on a city."

There are many, many reasons why the team sucks, says Pluto. And in his new book, False Start: How the New Browns Were Set Up to Fail, the Akron Beacon Journal sportswriter lays out several of them. "There was so much money-grubbing," he sighs. "Even by pro sports standards, I'm appalled."

False Start takes a detailed look at the back-room deals, knuckleheaded decisions, and the cash-fueled power plays that have misguided the return of the Browns over the past five years. And it's not an optimistic book. Its chapter titles tell the story: "Your Team Never Had a Chance." "Hired and Doomed." "Irrational Exuberance." "Needing a Reason to Believe."

While some blame goes to former owner Art Modell, who pulled the team out of Cleveland in 1995, Pluto says woefully inept management ultimately deflated any Super Bowl hopes. "The NFL never should have allowed the team to move," he says. "But they did, to take care of Art Modell.

"I remember getting so many calls from fans saying, 'I'm just glad Modell's gone. I'd rather have an expansion team than one run by Art Modell.' Well, guess again. The best thing would have been if Modell had sold the team to Al Lerner, and we would have had Lerner owning the team and Ozzie Newsome running it. And I have a feeling there would have been more than one Super Bowl with that combination."

Maybe. As it stands, though, the Browns have posted a dismal 29-58 record since their reorganization in 1999. And this year doesn't look a lot brighter.

After a half-decade of research, Pluto can cite lots of reasons why the rebuilt team has struggled. But one stands out. "This was the shortest start-up time since the 1960s," he notes. "You need close to two years to put a franchise together. For Cleveland, it was less than a year.

"It was just thrown together. It's like saying, 'We want you to hold a presidential dinner, but we want you to be able to put this thing together by shopping at a dumpster behind McDonald's. Just put together what you can.' . . . And this is what you get."

So the fans patiently wait. And wait. They might bitch, moan, and throw bottles at their team, but they're an optimistic bunch, says Pluto. (False Start is dedicated "To Browns fans: You deserve better.") There's always hope that this season will be the one. Still, "It would be so hard to turn this thing around in a couple years," says Pluto. "But the great thing about the NFL is that a team can get hot at the right time. But I'm not holding my breath."