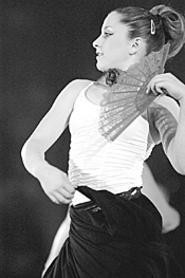 Olympic gold medalist Carly Patterson takes in some noncompetitive action at the Tour of Gymnastic Champions.
Sixteen-year-old gymnast Carly Patterson didn't have time to shake off the jet lag before she found herself onstage next to pop star JoJo at MTV's Video Music Awards in late August.

As the two teens were about to present the Viewer's Choice Award to Linkin Park, Patterson had a flashback to a year ago, when she was sprawled on the couch, watching the show at home in Texas. "It was just all so surreal," says Patterson, whose popularity had soared only days before, when she won a gold and two silver medals at the Olympics. The hardware included the top prize for the All-Around Champion title -- the first for an American female gymnast since Mary Lou Retton snagged that honor in 1984.

"Everyone knows who I am right now," she says. "I go out to places, and everyone looks at me and says, 'Look! That's Carly! That's Carly!' It's really weird. They debate whether they should come up to me. They finally come up to me and ask, 'Can I have your autograph?'"

Patterson plays the fame game like a pro. When she isn't bumping into Nick Lachey, Ashlee Simpson, and Shaquille O'Neal at celeb-studded events, she's making the rounds of morning news programs and late-night talk shows. And if that's not enough, Patterson is starring in the TJ Maxx Tour of Gymnastic Champions, which features more than a dozen fellow tumblers from the U.S. Olympic Team performing routines with Cirque du Soleil-style choreography. "My life has been crazy, busy, and hectic," she says. "I'm [still] taking in the joy of the Olympics."

So is teammate Mohini Bhardwaj of Cincinnati. At 25 years old, she's considered the sport's grande dame. "Once you've gone through [the Olympics], [this tour] is more fun, less pressure," says Bhardwaj, whose boyfriend popped the question in Athens. "You know how to deal with your nerves a little bit better. If you fall and make a mistake, it's not a big deal. You go along with it and play with it."

Brett McClure also prefers the tour's tension-free tone, especially after the summer games, where the men's team captured the silver medal. In 1996, McClure was part of the Champions' exhibition troupe near his Washington home. Eight years later, he still can't believe he's counted among gymnastics' elite. "I thought, 'Man, it would be so cool to be in a post-Olympic tour,' and now here I am, living my dream," says McClure. "It's just awesome."

He takes the words out of Patterson's mouth. When the tour's over, she'll return home for her junior year in high school. She'll shop around for her dream car, a Mercedes SL55. And she'll promote the sport, just as Retton has done for the past two decades. "I definitely want to stay in the public eye and do what she does, because it's awesome that she still gets recognized for what she's done, 20 years down the road," says Patterson. "She left me a message on my phone and said, 'If you ever need anything, you can just call me, because I've done all this before.'"