Denis Leary is on The Job, but can ABC find him an audience? 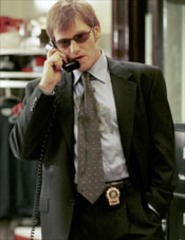 Get a Job: Denis Leary plays Mike McNeil, a cop with a mint tin full of pills, a stomach full of Scotch, and a bed full of mistress.
One can only imagine the pitch meeting at which comedian-turned-film actor Denis Leary told ABC programming execs he wanted to write and star in a show about a pill-popping, Scotch-swilling, chain-smoking, adulterous New York City cop who utters obscenities as casually as he exhales. It'll be a 30-minute show, Leary probably told them, shot with hand-held cameras that make it look like a documentary. And it'll be funny, yeah, only it won't have a laugh track. And sometimes, it won't even be funny. On purpose.

One can only imagine the reactions of men and women whose job it is to determine what America watches during prime time. Surely, they must have thought, this is just what Mom and Pop are looking for--a comedy about an asshole! Let's order six episodes and put it on against The West Wing! It'll be a smash!

Yup. That's what they thought. And that's just what they said, because on March 14, ABC will premiere The Job, a new half-hour series co-written by and starring Leary, in which he plays a pill-popping, Scotch-swilling, chain-smoking, adulterous, foul-mouthed New York City cop named Mike McNeil. It will air at 8:30 p.m. Central time, around the time President Jed Bartlet is launching into one of his inspiring, heart-wrenching speeches about the virtues of liberalism while surrounded by staffers who look a whole lot like Rob Lowe and Allison Janney. And it comes bearing the blessing of the woman who develops ABC's comedy series, who insists the network believes in the show and will stick by it even if audiences, at first, do not.

"Yeah, go figure," says Peter Tolan, the former Larry Sanders Show writer and producer who developed and wrote The Job with Leary. "I mean, ABC's behind the thing 100 percent, and believe me, that's unusual." Tolan, who also penned the screenplays for Analyze This and Bedazzled, laughs, as if to indicate he can't believe The Job got on the air, either.

The question, though, isn't how did The Job get on the air. The question is: How long will ABC give it?

It landed a prime-time slot because ABC's in desperate need of attracting the sort of young, fashion-conscious viewers who hang out at Central Perk and pal around with Will and Grace. Who wants to be a millionaire? Turns out, not a lot of folks between the ages of 18 and 49. A show like The Job--at once smart and smirking, clever and vulgar, brilliant and boorish--can go a long way toward overhauling a network's image. Make it, ya know, hip.

The Job also exists to prove that networks can make a show like The Sopranos without necessarily carbon-copying HBO's all-mob-cons hit. As ABC programming executive Carolyn Ginsburg Carlson insists, "We think a show like The Job is very timely. The audience has had a couple of experiences with flawed protagonists, like Tony Soprano, and there's something about Denis that makes you love him even when he's making mistakes and showing his flaws."

If nothing else, you have to admire her optimism. For two and a half years, Ginsburg Carlson has been ABC Entertainment's senior vice president of comedy series, meaning she has been responsible for putting on the air some of television's best series (among them The Drew Carey Show and Sports Night) and some of its worst (The Geena Davis Show and The Secret Lives of Men, to name but a few). She stuck with Sports Night--a laugh-track-free half-hour dramedy about the backstage goings-on at a SportsCenter-like show, created by The West Wing's Aaron Sorkin--even when audiences didn't. She has maintained a brave face when so many of her offerings have been savaged in the media (Davis' sitcom) or excised from the schedule like cancerous tumors (The Trouble with Normal and Madigan Men, the latter of which starred Gabriel Byrne as a single dad).

In the end, it was her idea to go with The Job, if only because, by her own admission, ABC "had nothing to lose." The network has offered up some 24 half-hour comedies in the last four years, and only the wearying Dharma & Greg has been a consistent audience-getter. Meanwhile, ABC dropped stand-up D.L. Hughley's comedy (it moved to UPN) and allowed Sabrina the Teenage Witch to set up shop at The WB, all but destroying ABC's so-called "TGIF" Friday-night schedule. Worse, it turns out fewer and fewer people want to watch Millionaire; the show that once clogged the weekly Nielsen Top 10 is slowly dropping out of sight, landing there only once during the week beginning February 18. The same week, ABC had only one other show in the Top 10: The Practice.

So, yeah, what the hell? Why not throw in with Leary? The worst thing that could happen is The Job garners all sorts of critical raves, thus guaranteeing it certain death, be it instant (ABC's lauded Wonderland aired only twice before getting the ax last year) or prolonged and agonizing (Sports Night, which lingered for two seasons, unwatched and unloved).

"I honestly don't watch television, but I know the history of shows like this that have fallen by the wayside," Tolan says. "Sports Night was a show that I would say to Aaron Sorkin, 'This is a sacrificial show.' I spoke to somebody at ABC during the time it was on, and I said, 'Now, I understand exactly what you're going to do with this show. You're going to keep it on for a year, and then you're going to pick it up for the next year, but it won't show for the entire year, because you want to send a message that you're interested in doing quality work that's a little different, but ultimately, you can't support stuff that's not being watched.' And that, of course, is exactly what happened."

This is how Leary got The Job at ABC: The actor-comedian had a long-standing deal with DreamWorks' television subsidiary to create a show, which DreamWorks would then pitch to a network. Tolan had his own deal with ABC, and when The Job landed at the network's doorstep, it was decided they should work together--even though Tolan says he remembered Leary merely as "the guy who had been on MTV a long time ago." Leary explained his idea, Tolan fleshed it out, and the two finished the pilot, which ABC bought and decided to put on its schedule during the spring--to fill in the blanks left by shows that had been introduced the previous fall and summarily dismissed.

Ginsburg Carlson insists ABC had long wanted to produce a show with Leary--and that the network was "thrilled" when Tolan and Leary handed in the pilot. Tolan confirms that ABC didn't even make the two tone down the language (in the pilot, Leary refers to another cop as "numbnuts," and the second episode, starring Elizabeth Hurley as herself, contains prodigious use of the words "penis" and "tits") or soften Leary's odious image. What you see next Wednesday (assuming you aren't watching The West Wing) is pretty much what the two wrote and turned in to the network, according to Tolan and Ginsburg Carlson.

The latter insists there's historical precedent for a show like The Job, explaining it's both a familiar cop show (à la NYPD Blue) and a daring comedy with a lead character who's at once loathsome and lovable (Ginsburg Carlson refers to both All in the Family and M*A*S*H, which is pushing it, but not entirely inaccurate). The networks have had little luck of late promoting shows with obnoxious, or at least complex, lead characters. Just last season, Fox was quick to pull the plug on the laugh-trackless half-hour comedy Action, in which Jay Mohr played a heartless film-studio exec, and ABC killed Sports Night despite its overwhelming critical acclaim. But that hasn't stopped the networks from trying to create a series like The Larry Sanders Show, so who better to turn to than the man who helped launch it in 1992?

"I would say that during the last couple of years, those shows [Action and Sports Night] have been guinea pigs, and the audiences have gotten used to watching those kinds of things," Ginsburg Carlson says. "Even though they didn't succeed, they played an important role in opening our minds as a culture to different kinds of shows."

Perhaps, but the highest-rated shows on the networks still look and smell an awful lot like TV did in the 1950s: medical dramas, hour-long cop shows, courtroom dramas, and game shows (even those sold under the rubric of reality TV), and the good ol' suburban sitcoms are what Americans keep tuning in, even if it's so they can only tune out. No matter how much the networks know they desperately need to change their content in order to compete with the HBOs and Comedy Centrals of the satellite world, they keep finding themselves flogging the same dinosaurs. Despite its acclaim, Everybody Loves Raymond is nothing more than yet another mundane, disposable sitcom--The Honeymooners, worn bare from years of recycling.

But the networks aren't entirely to blame; viewers get what they demand, which is too often canned laughs gone sour. Networks would no longer protect Seinfeld or Hill Street Blues or Cheers--all of which languished at the bottom of the ratings during their first years on the air. They'd be axed by week six...or maybe week two. The networks don't know what they need to be: cutting edge or dull as a butter knife. Audiences insist they want better, but when it's offered, they cry foul and disappear into the shallow end of the kiddy pool.

"You get a message from the American viewership that says, 'You know what? You're losing your audience year after year, because we're not interested in what you're showing us,'" Tolan says. "And so there's the initial idea of, 'We gotta change what we're putting on the air,' but talking about change and actually changing takes a very long time. There's this glacial movement, and that's not a bad thing. That's just the way the business moves--very slowly. Here's another shot, and if it's too early, then we'll be sunk, God knows.

"There's no such thing as a build for this stuff, especially for a show like this, where it's a risk. You'd better perform early, and perform often, or you're screwed. The guys at ABC, though, they certainly are recognizing they have to do something different. These are the guys who brought you Millionaire and continue to bring it to you ad nauseam at this point, but nevertheless, that was probably the biggest programming decision of the year except for Survivor for quite a while. Obviously, they recognize they need to do something different, and this is their response. And you know what? They hope, they hope, they hope that this works."

But if it doesn't, don't be surprised. It just might be your fault.