The agony of stillbirth turns eloquent in David Hansen's I Hate This.

Send a News Tip
I Hate This Cleveland Public Theatre 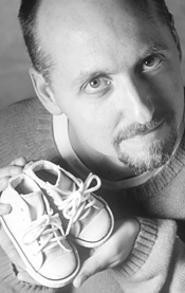 David Hansen's heartrending tale deserves to land on another stage.

"We don't touch dead things." This is one of the tortured thoughts that streak through the father's mind, a split second after he is asked by a nurse whether he wants to hold his stillborn son.

But "dead things" can certainly touch us, and did so poignantly and affectingly in the world premiere of the one-man play I Hate This. This true story, written and performed by David Hansen, who experienced the awful event of stillbirth with his wife, Toni Thayer, is regrettably not now in production. Its brief three-day run ended last Sunday, along with the shortened season at Cleveland Public Theatre. But there are plans to tour the show, and since it is easily portable, it is likely to show up again around town. When it does, save the date.

In an era when virtually any personal tragedy or traumatic event is fodder for talk-show huckstering, stillbirth remains a virtually undocumented occurrence to the general public. It is whispered about, given the tight-lipped head-shake, and quickly filed under "subjects we don't mention." Perhaps this hesitancy is embedded in the nature of the situation -- losing the glorious potential of a new life just weeks before the baby's first breath.

The further proof of our distance from this sensitive issue is this insight from the play: In the entirety of the English language, where there is a word for damn near every stupid thing, including that vertical groove under your nose (it's a philtrum), there is no word for the parent of a dead child. In part, this work is an attempt to give those parents an identity and a way for all of us to integrate such a devastating reality into our lives.

Playwright Hansen, a local actor and director, bravely enters this void and manages to walk a devilishly delicate line. If he delves too deeply into minute details or wallows in justifiable self-pity, the work collapses and the audience begs for release. So he tells the story using a dual-track chronology; the agonizing 36 hours between discovery of the lifeless fetus and the delivery of the dead baby are thankfully interspersed throughout the months-long process of David and Toni's reentry into normal life.

Along the way, Hansen employs humor to lighten what could be an oppressive journey: A running joke about his futile attempts, long after the death of their child, to negotiate through a telephonic bureaucracy and remove their names from a baby-food company's mailing list is at once achingly familiar and funny. And a couple of scenes with his six-year-old British niece, Lydia, are lovingly sentimental without becoming bathetic.

The structure of the work, consisting of mini-scenes lasting from a few seconds to a couple of minutes, helps relieve the tension and gradually forms a mosaic of the couple's dream deferred: David finds himself sitting in the baby's room, which he had almost finished painting; he and his wife are without plans for the summer, since taking care of the baby was all they had projected.

As a performer, Hansen is affably direct and casual, providing the audience room to process the painful moments as he lived them. He knows the territory, so he is as gentle with the audience as most of his family and friends tried to be with him. At one point, he is wounded by a friend's thoughtless comments, and he responds with a baleful glance that registers both his distress and his understanding that it's hard for anyone to know what to say.

While Toni is referred to often and speaks occasionally, this thought-provoking play could be strengthened by a clearer representation of her voice. The father's perspective provides a "safe" viewing point, due to his biological separation from the torment at hand. But it leaves unanswered what Toni is thinking, as her body rebels against the life she so treasures. How does she cope with having her hopes snuffed out after seven months of pregnancy? Capturing these feelings in a theatrically viable way would be a challenge, but based on his deft handling of the rest of the script, Hansen would certainly seem up to the task.

Director Thomas W. Cullinan wisely places David in a spare set -- just a small stepladder, a rocking chair, and a phone -- conveying the barrenness of the event and keeping the focus on his actor's subtle transformations. By avoiding even one tearful scene, Hansen and Cullinan throw the responsibility for an emotional response back on the audience, where it belongs in such a potentially volatile piece.

Among many telling moments, one of the most startling comes when David realizes that a dispassionate autopsy report is all he will ever know about his son -- other than his name: Calvin Baker Hansen, the boy who never was.