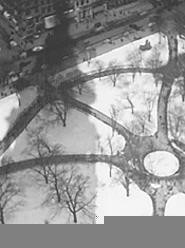 "The Octopus," by Alvin Langdon Coburn, gelatin silver print.
At the turn of the century, an American novelist named Booth Tarkington was spoken of in the same breath as Mark Twain. How times (and tastes) change. Were it not for Orson Welles's classic 1942 film based on The Magnificent Ambersons, Tarkington would be even less known today. Almost a hundred years ago, a talented young Bostonian by the name of Alvin Langdon Coburn seemed destined to become one of the big names of American photography. Today, were it not for the efforts of a few enterprising photography experts and shows like the one now at the Akron Art Museum, he would barely be known.

It's a good sign when neglected artists like Tarkington and Coburn are championed. A retrospective organized by the George Eastman House International Museum of Photography and Film in Rochester, on view in Akron and titled Alvin Langdon Coburn: Photographs 1900-1924, proves that the turn-of-the-century artist somehow was able to capture the pulse of the modern American city without abandoning the hazy, soft-focus strategies associated with the pictorialist tradition. Coburn's work, this exhibit tells us, should not be seen as a humble way station on the way to the clean, sharp-edged modernism of later photographers like Edward Weston. Rather, Coburn should be judged on his own terms: as a photographer who pulled off the difficult feat of creating work that fused 19th-century romanticism with 20th-century realism.

Coburn, for the most part, worked in the photographic style known as pictorialism (though during the '20s, for a brief spell, he dabbled in avant-garde techniques). Pictorialists stressed suggestion and atmosphere over direct description. By employing romanticized lighting, soft focus, and compositions that had a stagy, pre-planned feel, they tended to call attention not to their subject but rather to what they were doing with it. Viewing a pictorialist photograph is akin to reading the first paragraph of an Edgar Allan Poe short story, such as "The Fall of the House of Usher." You sense immediately that Poe is not interested in just the facts. He blurs outlines in an attempt to make the reader experience "a dull, dark, and soundless day in the autumn of the year." In photographic works like the 1904 "Sailboat," there is a feeling of eloquent decrepitude. The sailboat is there all right, but Coburn blurs outlines so that our attention is drawn to cracking wood, shriveled sails, and an ominous sky that suggests an impending storm. Coburn, like many pictorialist photographers, also added atmospheric patina-like touches to the photograph with a pencil. This is not subtle work, but shows that, at 22, Coburn already had a fine grasp of the pictorialist ethos.

Gloomy portraits of a vanishing past were only one part of the photographer's expressive arsenal, though. Coburn was equally adept at capturing something of the optimism and unshakable faith in progress that infused American life at the turn of the century. His photographs of New York taken around 1912 are particularly impressive in this regard. The wonder is that, while such work still betrayed a loyalty to soft-focus pictorialism, it neither idealized New York nor made the city a bit player in some unfolding narrative existing outside the four corners of the frame. There is an admirable sense of balance in Coburn's New York photography.

A case in point is a 1912 shot of the Flat Iron building taken at nightfall. The photograph is more abstract than descriptive as it draws a connection between the verticality of the skyscaper, a tall street lamp, and a faceless mass of pedestrians at the base of the frame. A spidery tangle of leafless tree branches in the foreground counterbalances the clean lines of all that urban architecture and suggests that the city and nature can peacefully coexist. At the time the photo was taken, the Flat Iron building (architect Daniel Burnham's ingenious solution to the problem of fitting a building into the triangular plot of land where Broadway crosses Fifth Avenue) was already ten years old, but to Coburn and others, it probably stood for the proposition that human innovation could overcome tremendous obstacles. Coburn cleverly chooses to celebrate this idea of harmony between human beings and their environment by capturing a building that seems to embody that principle. This photograph, one of Coburn's finest, is also a cultural document that brings to life a belief system that World War I would soon shatter.

Equally striking from this period are those shots that look down on the city from above. Coburn had recently been photographing the Grand Canyon (some samples from his expedition are on view in the exhibit), and while there, he photographed certain portions of the canyon straight down as he stood at the top. He captured the place's sense of vastness (that sounds easy to do, but as Dwight Macdonald once wittily pointed out in a film review of some biblical epic, some directors can take 20 people and create a crowd, while some can take 2,000 people and succeed only in creating a confused cocktail party). Coburn was able to apply his mastery of scale to his New York work. His famous 1912 shot "The Octopus" is a picture of Madison Square taken from high above. It's wintertime, and the paths in the square stand out clearly. From this angle, those paths form a repetitious rhythmic pattern that suggests the tentacles of an octopus.

Look even closer, and you see how Coburn has balanced a sharp triangle at the top of the frame (formed by the outer edge of the park and the right angle of the picture frame) with the softer, rounded triangles formed by snow and path. The circle from which the paths diverge is asymmetrically placed, and the shadow of a skyscraper that overshadows the left-hand side of the frame also points to tensions that might lurk in the big city. From this angle, what we see is pattern. There is something grimly prophetic about this ominous photograph, which seems to hint at a world in which balance is tenuous. Coburn may have been optimistic about the 20th century, but, like all fine artists, he listened with a third ear and captured undercurrents that were inaccessible to most people. The octopus is not a friendly, benign creature, and Coburn's "The Octopus" is not a friendly, benign photograph. It stings.

Although lauded in his lifetime for his portraits, many of them haven't aged well. The exhibit has an entire room dedicated to them, but one would rather see more of the New York scenes. The problem with the portraits is that they are stuffy and straitlaced. Like Victorian biography at the time, which tended to make the meanest of us look like angels, Coburn idealized his subjects. His portraits of Teddy Roosevelt, Henry James, H.G. Wells, Mark Twain, and others are good (even great) examples of stained-glass Victorian portraiture. Roosevelt wears his general-purpose presidential scowl. No trace here of the Rough Rider who charged San Juan Hill or the intellectual who, to the end of his life, retained a sense of childlike curiosity about everything. The portrait of Rodin is interesting, though. Here, with flowing white beard set off against a dark shirt and matching beret, he has the air of an Old Testament prophet. The resulting sense of austerity provides an unusual take on an artist best known for his sensual nudes. This is the Rodin of "The Thinker" rather than the Rodin of "The Kiss."

The 149 images in this exhibit suggest that Coburn was a photographer to be reckoned with, but also that some of his work might be an acquired taste. The city scenes are stunning. They speak to us today with uninhibited clarity about the triumphs and tribulations of a world expanding at an exponential rate. Coburn saw the rays of sunlight, but he also didn't neglect the shadows, and for that we can be grateful.