Coming soon to a living room near you: One blue-haired, folky, alt-rock head-twister. 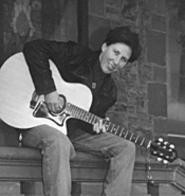 Lesbi-rocker Lojo Russo defies classification. If she's feeling rebellious, she'll work out hard-charging strings of chords. When she's mellowing out, she'll lay down an easy-on-the-ears melody. "I'm in this weird kind of genre purgatory, where the rockers think I'm too folky and the folkers think I'm too rock," she says. "Either way, I can put out some tremendous noise from this one little person with her acoustic guitar."

In the past couple of years, Russo has stumbled upon a new legion of fans. On the house-concert circuit, gays and lesbians invite complete strangers into their homes to hear regional artists, such as Russo, perform in suburban living rooms. She brings her song-and-storytelling act to town on Saturday for the Tirabassi-Kin concert series. In a laid-back setting, Russo emphasizes her lyrics over the music. "Working in a bar, I get the noise and energy," says Russo. "They hear the music, but they don't get the stories. This way, I get to bring it down to a more personal level and let the audience get wrapped up in my story."

Russo's musical voyage began in September 1986 when, dressed like a page, she played Celtic tunes on guitar, mandolin, and the Irish bodhran drum at the Minnesota Renaissance Festival in her native Minneapolis. Roaming the grounds as a wandering minstrel, Russo thought her 16th-century garb fit her sexual orientation. "If you're not wearing tights and a tunic, you're wearing those big hoop skirts and a lot of velvet," she says. "In late summer in Minnesota, it gets pretty darn hot. I chose the tights and tunic. In doing so, I've felt like I've grown up as a tomboy."

A tomboy with a blue-dyed coif, to boot. Until she released her third solo CD, Stoic Abandon, earlier this year, Russo sported a punk hairdo to go along with her alt-rock repertoire. "People saw this girl with blue hair and an acoustic guitar, and they wondered, 'What the hell is she going to pull out of her ass?'" she laughs. "I really enjoy twisting people's heads."