In 'Log Cabin,' Now at Convergence-Continuum, LGBTQ Characters Deal With the Modern World 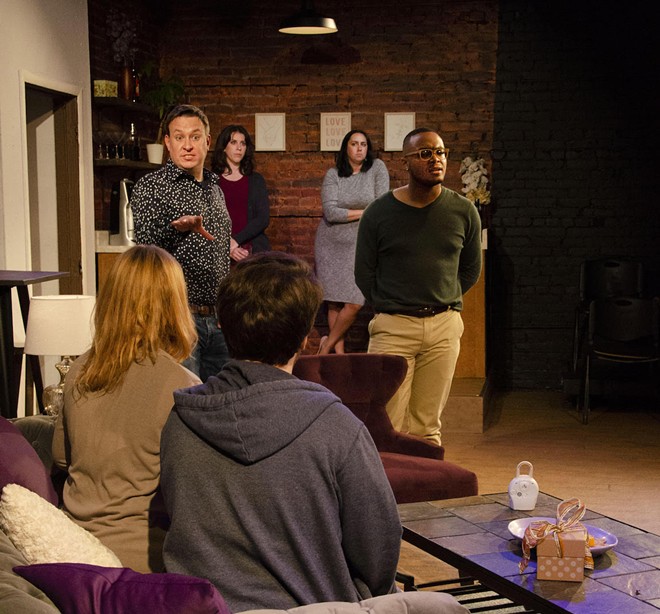 Just to be clear at the outset, if you see the "Log Cabin" as a current offering in your local theater listing, it's not a play about the humble beginnings of intrepid Abe Lincoln or a reference to "Little House on the Prairie." No, the title of the play, now at convergence-continuum theatre, refers to the soon-to-be-apocryphal subspecies of gay Republicans dubbed Log Cabin Republicans, who used to swan about in that political party until it became an anti-democracy club for thugs and conspiracy fantasists.

This play by the high achieving playwright and TV writer Jordan Harrison ("Marjorie Prime," "Orange Is the New Black") takes place from 2012 to the election of Donald Trump in 2016. In other words, a time that began with optimism for gays and ended with the elevation of a dystopian president who is not done wreaking havoc on women, gays, and so many others.

Playwright Harrison has a raft of societal topics on his mind in this play, including the merging of gay and lesbian couples into society. To handle that, he has a gay couple Ezra (who is white, played by Scott Zolkowski) and Chris (who is Black, played by Isiah Betts) visiting the lesbian couple Pam (Carolyn Demanelis) and Jules (Samantha Cocco) in their trendy New York City flat for cocktails and a high-octane bitch fest. Just to even out the apportionment of LBGTQ folks, they are joined by a trans man Henry (Emmett Podgorski, a trans actor), who as Helen was Ezra's best friend. Henry has a young girlfriend Myna (Lucy Turner), who has recently focused her romantic interests exclusively on transmen.

That box-ticking arrangement of identities is a bit forced, but it's all in the service of Harrison's goal: to show how those on the fringes of society—through race, sexual orientation and gender—deal with the world. Thanks to the playwright's dazzling wordplay, the 90-minute piece clips along on a wave of quips, jibes and knowing cultural references.

The play's structure utilizes many short scenes, each introduced with a time-relative orientation shown on a screen ("One Minute Later," "A Long Year Later," etc.). That screen also displays two-second clips from news stories of the time, to keep the audience locked into the right chronology.

After an introductory anecdote Ezra shares about his father's reaction when he learned his son was marrying a man (the old guy rehashed warnings about AIDS) the gay and lesbian outsiders target the new outsider Henry, who they claim has become "an ass-slapping misogynist." Other verbal fencing ensues over the prefix "cis," which indicates people who live in their birth gender. Ezra and Chris flare up at that designation, rejecting being grouped alongside the bullies who tormented them for being gay in their earlier years.

As Pam cranks out drinks and cheese snacks from the kitchen, she and Jules announce that they're going to have a child whom they decide to name Hartley. As time leaps ahead, we see that Ezra and Chris also decide to become parents, and they want to implant a fertilized egg into Henry's still functional uterus to complete the mission.

If that's not complicated enough, we also are introduced to baby Hartley (Podgorski), who hasn't spoken a word in his young life, but has a rich and snarky inner monologue voiced for the audience.

As directed by Eva Nel Brettrager and Cory Molner, "Log Cabin" has plenty of laughs, thanks to strong performances throughout and the playwright's rapier wit. But eventually it becomes a theatrical trapshooting exercise in which topics are launched into the air and the characters take aim and fire with unerring precision.

The script ultimately provides a soft landing for all this uproar, and you leave feeling entertained. But not as enlightened as you could have been if the Harrison had edited out a few issues and given the actors more room to live inside the changes they experience.