There's no time for pleasantries at Cupid Party. 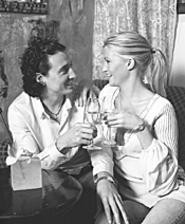 Maggie Fishell wasn't expecting to hit it off with a complete stranger in less time than it takes to heat a can of soup. To her surprise, she got a date out of it. Such is the beauty of 8minuteDating's Cupid Party.

Here's how it works: You're matched with eight potential dates for eight minutes each. Wearing a tag that displays only your first name, you can talk about anything except last names and phone numbers. Afterward, you log onto www.8minuteDating.com and enter the names of the folks you'd like to meet again. If one of them also wants a love connection, an e-mail is sent with that person's phone number.

It worked for Fishell. She went to lunch the next day with one of the guys she met. "I wouldn't call it love, and it probably won't become anything serious," she says. "But I met a nice guy I wouldn't have otherwise met." You shouldn't expect to meet your soulmate, she says, but "It's definitely a better way to meet people than walking into a bar and asking someone what their sign is." Cupid Party is at 6:30 p.m. Tuesday at Dave & Buster's, 25735 First Street in Westlake. Admission is $35; call 440-892-1415. -- Cris Glaser

You expect ebullient words from a guy who pursues butterflies for a living, and Robert Michael Pyle doesn't disappoint. In Chasing Monarchs, Pyle dots his tale -- one that covers 9,000 miles just to make a point about winged migration -- with such exclamations as "dramatic," "amusing," and "spectacular." So why'd he do it? "I didn't believe the old established model that said all monarchs born east of the Rockies migrate to Mexico, while all those originating west of the Continental Divide end up on the California coast," he says. In addition to adventures with fluttering critters, Pyle had a run-in with DEA officials in Douglas, Arizona. "They thought they had a live one in me," he explains. "When they finally realized I was merely a butterfly hunter, they were quite disappointed. One of them gave me directions to a canyon . . . where I finally found western monarchs heading into Mexico." Pyle shares stories at 7:30 p.m. Friday at Happy Days Visitor Center, 500 West Streetsboro Road in Peninsula. Admission is $3 to $6 adults; call 800-445-9667. -- Lucy McKernan

Peeper Show
The eyes have it in Polley's latest depressing drama.

Sarah Polley has sad eyes. They're a fundamental part of her characters. As the sole survivor of a school-bus accident that kills her classmates in 1997's The Sweet Hereafter, they convey guilt, loss, and despair. In My Life Without Me, Polley plays a 23-year-old mother and wife diagnosed with cancer. With two months to live, she makes a list of "Things to Do Before I Die" -- which includes having an affair and getting a new hairdo. There are scenes of genuine heartbreak, particularly when she records a series of birthday messages to her two daughters. Get ready to cry at 9:05 p.m. Saturday and 4 p.m. Sunday at the Cleveland Cinematheque, 11141 East Boulevard. Admission is $5 to $8; call 216-421-7450. -- Michael Gallucci