Treasury of the World demonstrates a masterful melding of art and function.

Send a News Tip
Treasury of the World: Jeweled Arts of India in the Age of the Mughals Cleveland Museum of Art, 11150 East Boulevard Through May 19 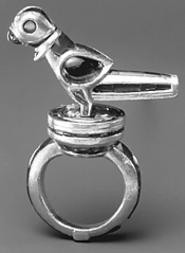 "Finger Ring With Rotating and Bobbing Bird"
When the Taj Mahal was built in the 17th century as a mausoleum for Muslim ruler Shah Jahan's favorite wife, the tribute, at the time, was without precedent in Islam.

Now, at the Cleveland Museum of Art, one can see what master goldsmiths and jewelers were making around the time the grand Indian monument was built. Their work, in a word, is regal. Starting with the finest raw materials -- pure gold, diamonds, emeralds, and rubies -- these artists made cups, plates, rings, and accessories notable for their dazzling color and the refinement of their inlaid detail. Around 325 of these objects are on view in Treasury of the World: Jeweled Arts of India in the Age of the Mughals.

The exhibit comes to Cleveland courtesy of the al-Sabah collection at the Kuwait National Museum. Sheikh Nasser Sabah al-Ahmad al-Sabah began collecting Islamic art in the mid-'70s. Scholars consider his collection of Mughal jeweled arts (Mughal being the name of the conquerors who ruled India from 1526 to 1857) the finest in the world.

Many of these objects reposed safely in a Kuwaiti museum until Saddam Hussein had other plans during the Iraqi invasion of Kuwait in 1990. At that time, the collection was whisked away to Baghdad. When the "mother of all battles" turned out to be a flop, the collection went back to Kuwait, fortunately unharmed.

Seventeenth-century Muslim rulers, for whom many of these objects were made, are often called history's greatest patrons of the jeweled arts. They not only had access to the best raw materials -- India, after all, was the world's major source of diamonds before their discovery in Brazil in the 1700s -- these rulers had master craftsmen at their disposal. Among their many skills, these craftsmen were able to create artful settings that combined meticulous attention to detail with a firm grasp of the larger picture.

Their ability to achieve a seemingly effortless balance between detail and the whole is everywhere evident in the work on display. A soberly shaped cup -- the very picture of simplicity -- is intricately set with gemstones. The combination does not result in ostentation for its own sake. It's to the artist's credit that his intricate design work doesn't make this any less of a cup; rather, it's a cup that rises above its functional significance through the use of detail and precious materials.

Such transcendence is exemplified in "Finger Ring With Rotating and Bobbing Bird." The bird is starkly rendered, its body divided into three nearly equal parts. The artist was clearly attempting to capture something of the bird's essence by keeping its form simple. Yet the addition of multicolored and multishaped gemstones gives the object a detailed richness to go along with its formal purity. The gems -- rubies, emeralds, diamonds, and a single sapphire -- were set using the kundan technique of fusing hyperpurified gold with stone at room temperature (that is, without soldering). The piece would have served its purpose as a ring, but it also demonstrates how simplicity and decorative elaboration can be combined into an artistic whole.

Another example is "Ruby Dagger," a gold-handled weapon with sheath, covered with more than 2,400 rubies, emeralds, and diamonds. In addition, the piece has extensive engraving work. As a ceremonial object, it is functional and luxurious at the same time. So, too, is "Lidded Cup/Saucer," made of gold with painted enamels. The cup is onion-shaped (reminiscent of the main portion of the Taj Mahal) and has bright red tulip-shaped motifs. Here again is a simple shape allied with decorative detail. The piece exudes disciplined opulence.

"Turban Ornament," composed of diamonds, emeralds, and painted enamels, remains a striking example of art functioning as symbol. The richness of its materials would have reflected the authority and power of its wearer.

The fine catalog for this exhibit includes revealing closeups of the pieces on display; the exhibit also includes occasional photographic enlargements of the works. This helps viewers gain an even better appreciation of the craftsmanship on display as well as the wealth needed to make it a reality. Treasury of the World opens a curtain on a little-appreciated aspect of Islamic culture. Saddam Hussein salivated over this collection; we're lucky he didn't get to keep it.