Life-sized prints with illustrated bandaids are popping up across Cleveland 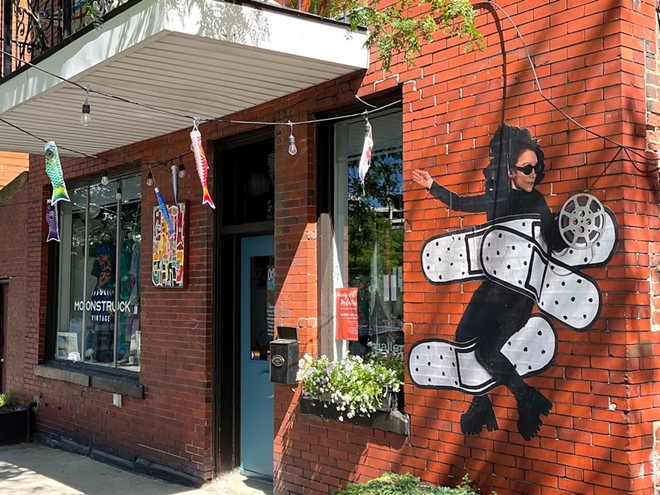 Sixty works across more than a dozen neighborhoods have been installed for 'Culture Fix CLE: Healing Our Community Through Art,' a project featuring life-size prints of local subjects posing with black-and-white bandaids taken by Israeli artist Dede Bandiad and artist/partner Nitzan earlier this year.

The aim and the vision, according to Dede, is to provide a visual narrative of the harm to arts and culture brought by the pandemic, to build cultural bridges between Israeli and American art, and to connect with the community through the universal theme of Tikkun Olam — “repairing the world” — which is a fundamental Jewish value.

"The intention of the project is to bring the arts to the public without filters and make the artist accessible, bringing their art to everyone who passes by in the street," Dede said.

'Culture Fix,' produced in collaboration with the Jewish Federation's Cleveland Israel Arts Connection, is a featured highlight of the upcoming FRONT triennial, which kicks off on July 16 and whose theme this year (Oh, Gods of Dust and Rainbows) embraces art as an agent of change.

Dede, who is based in Tel Aviv and who conceals his identity from the public, emphasized the collection is a chance to get to know or catch up with local artists who are featured in the collection.

Writer, filmmaker and designer Kasumi was one of the artists spotlighted for this project. Her image is installed at Moonstruck CLE Vintage at 11917 Mayfield Rd, Little Italy.

“For me the highlight was meeting and hanging out with Dede and Nitzan,” said Kasumi. “The photo shoot was incredibly enjoyable, not just because I got to wear my 5-inch platform boots, but as an artist whom people refer to regularly as off the wall, I can say that I’m finally on one.”

Dede is inspired by the urban landscape and the life behind a city’s constantly evolving architecture. The artist examines the perceived absurdity of dwelling in these man-made structures and argues this existence to be paradoxical

According to the artist bio: “They maintain a solid relationship between the concept that generates them, the specific location where they appear, and the materials and methods used to create them. Dede is motivated by the need to leave something after him, the need to be meaningful and to promote understanding. His art is, for all intents and purposes, a statement of Existence and installation.”