Lord of the Axe

God-fearing Robert Randolph is becoming a deity himself. 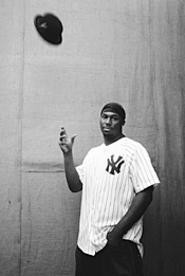 Robert Randolph praises God and the guitar at the Agora Sunday.
SUN 6/29

Robert Randolph is the best pedal-steel guitarist ever to come out of the church. He's also the most soulful singer to be associated simultaneously with gospel and jam-band music, and he's something of a cult hero in the making.

Now in his mid-20s, Randolph honed his chops at the House of God Church in his native New Jersey, where his father was a deacon and his mother was a minister. His 2001 indie recording, Live at the Wetlands, was picked up by Warner Bros. last summer. The album transcends its humble roots (the Pentecostal Church originally used steel guitars, because they were cheaper than pipe organs) by bridging spiritual and neo-hippie music with blues basics. "I knew it would have the same effect on the people in the rock and blues scenes as it did on the parishioners in the church," he says.

Randolph is wrapping up a tour with his three-piece Family Band before joining the Dave Matthews Band on the road in July. He's at the Agora Theatre (5000 Euclid Avenue) at 9 p.m. Sunday. Tickets are $13. Call 216-241-5555 for more information. . -- Michael Gallucci

Guided by Voices have a new album coming out in August. It's called Earthquake Glue, and it sounds pretty much like the revolving group's past couple of releases: decidedly indie-minded, yet accessible in ways that early material (such as the still-brilliant Bee Thousand) never wanted to be. Tuneful but fractured, Guided by Voices' music is capable of grabbing you immediately or challenging you all the way to the end -- and sometimes both, within the same three-minute song. Either way, it's never boring. The Dayton-based group is at the Lime Spider (207 South Main Street in Akron) Friday for a 9:30 p.m. performance. Expect to hear almost anything from leader Robert Pollard's extensive catalog, as well as some new stuff -- like the cool "I'll Replace You With Machines." Tickets are $14. Call 330-762-2350 for more information. . -- Michael Gallucci

Vinylbaby doesn't back down from politics in its '70s glam/'90s alt-inspired music. The quintet reinforces its message -- most recently against the war in Iraq -- with a widescreen TV onstage. "[It's] a blend of politically relevant images, animation, humor, and whatever we feel like throwing in," vocalist Dean Spanos says. Last year, the band released its sophomore CD, Rope, an upbeat, nine-track collection that further explores its politics on anthems such as "World Come Down." "We don't have millions of dollars or the luxury of endless hours of studio time," Spanos says. "But I think we came close to our goal." Vinylbaby plays at 10 p.m. Saturday at the Maple Grove, 14832 Old Granger Road in Maple Heights. Admission is free; call 216-475-4224. . -- Cris Glaser