Right-wingers and punks find a friend in WRUW's A.P. Magee. 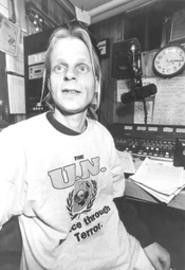 Walter Novak
A.P. Magee mixes potent political cocktails.
What music will you be listening to when our nation's military thugs kick in the door? It's a question that WRUW DJ A.P. Magee -- not his real name; the initials stand for "American Patriot" -- has given a lot of thought.

Magee is the mind and voice behind Domestic Terrorism, a two-hour program that sandwiches sound bites from Ezola Foster (Pat Buchanan's running mate) and notes from a meeting of the John Birch Society (which spearheads the "movement to restore and preserve freedom under the U.S. Constitution") between punk anthems like the Ramones' "Human Kind."

"It was punk-rock music that turned me on politically," says Magee, a self-described right-wing Christian extremist, who's been bringing his blend of punk and politics to Cleveland for the last two years. "Listening to college radio, I heard some punk rock. I started paying attention to stuff like the Dead Kennedys, who were singing these political things. Their songs were really deep and meant something."

Magee's music selections come from hours spent in record libraries searching for some "patriotic metal band or punk." On other occasions, he tries to match songs to an issue, as with gun-control questions raised by the pamphlet "Jews for the Preservation of Firearms." "I would talk about this, then play the song 'Guns' by this punk band D.I.," Magee explains.

Though Magee doesn't agree with the "basic anarchy" that's at the heart of the punk ethic, he does agree with the anti-authoritarianism. "They're against what's going on -- the corruption in government -- that's what they sing about. They're not singing about some girl or something stupid."

Political or not, though, the music sometimes leaves his right-wing listeners in the cold. "Yeah, it is true, a lot of people hate the music," Magee admits. "That's why I play the sound bites in between songs, so they can put up with it."

Most of the clips and discussions center around conspiracy theories -- the playground of those somewhere to the right of the right wing. Recently, listeners were treated to a discussion of the Illuminati, George W. Bush's membership in Yale's Skull and Bones society, how the U.N. is trying to unite the world for these groups, and how this figures into biblical Armageddon. "A lot of what the Bible talks about is already occurring," Magee says. "The Book of Revelation -- even the Book of Daniel -- talks about a world government, and this is what we're heading into right now."

Despite the conspiratorial rhetoric, Magee is open to other points of view. Gary Seman -- chairman of the Lorain County Libertarian Party and frequent guest of the show -- says that Magee works outside the right/left dynamic. "The problem we have in this country is globalism," Seman sums up. "There are people you'd describe as being on the left, who are against it, and people on the right."

Magee just wants to make sure they're all fans of Johnny Rotten.