'Meteor Shower' Promises More Than it Delivers at Beck Center 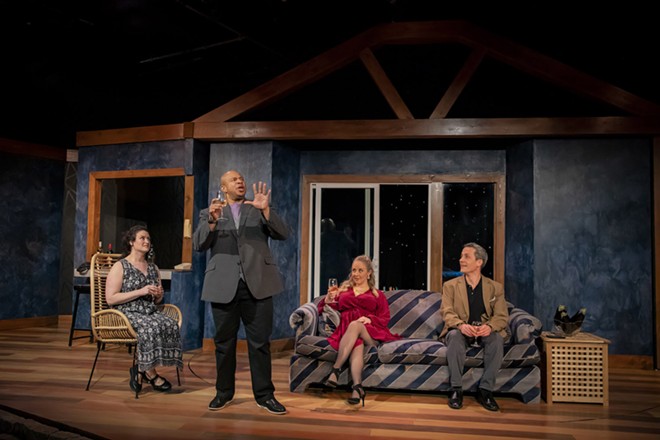 Photo by Steve Wagner Photography
In any play, the subconscious mind is a difficult subject to deal with, especially if you want it to be funny. However, that is the gauntlet thrown down by playwright Steve Martin (yes, he of the arrow-through-the-head schtick), in the brisk 80-minute one act, Meteor Shower, now at Beck Center.

Corky (Lara Mielcarek) and Norm (Abraham Adams), a married couple in Ojai, California, has been working on their communication skills by delving into various self-help books and seminars and picking up techniques. They illustrate one of them by stopping whenever one of them says something that might cause hurt feelings to go through a soothing, quasi-apology ritual ("I appreciate you." "I acknowledge your appreciation.") followed by a hug. And along the weay, one observes that, "Either you deal with your subconscious, or your subconscious deals with you."

With that marker set down, we watch as they greet their cocktail guests for the evening, another couple who, we eventually learn, have more than apologies and hugs on their minds. The play is broken into multiple blackout scenes, some of which are slight revisions of a preceding scene, giving us insight that the guests, Gerald (Leilani Barrett) and Laura (Leslie Andrews), have a subversive agenda in mind, similar to the nasty game that's played for keeps in Who's Afraid of Virginia Woolf by Edward Albee.

Of course, Martin is no Albee, nor does he aspire to be. His slyly intelligent sense of humor includes a large dollop of absurdity mixed with agile puns and other wordplay, not to mention the occasional sight gags. And all of that is at work here, as the relations and tensions among these four people touch on a variety of sexual pairings and tonal shifts.

While there are a number of amusing and gleefully raunchy moments, Martin's script never manages to corral all the thoughts he shoots into the air, much like the Perseid meteor shower that is in progress up in the heavens that night. But since the jokes aren't grounded in character, they begin to feel thin and formulaic, bursting brightly then quickly disappearing.

This presents a difficult challenge for the talented cast, which performs well in general. But this kind of inch-deep script demands a tight ensemble acting style that crackles with energy and danger. Unfortunately, director Scott Spence doesn't keep his actors on that knife edge, opting for a softer pace that fails to ignite many sparks.

As for the playwright, he clearly has some doubts about whether his theme about dealing with the subconscious has landed properly. So, he makes the all-too-common mistake of trying to correct it at the end by having a character explain what just happened. That is the kiss of death for any play that wants to be taken seriously, even in a funny way.

The set design by Cameron Caley Michalak features a slick rotating platform and meteor projections by Tim Chrisman do just enough to set the mood. But the laughs are not substantial enough to help this Meteor Shower light up the stage.