Prolific artist often missed the mark when he ventured beyond functional works. 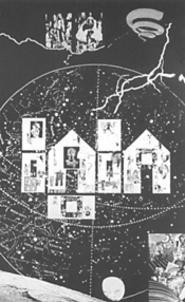 "Odyssey-Structure #3," by David Batz, photostat.
When Cleveland artist David Batz died in 1994, at the age of 49, his completed works ran into the thousands. Granted, the graduate of the Rhode Island School of Design and onetime pupil of glass wizard Dale Chihuly worked mostly in ceramic, a medium that lends itself to high-speed production. Still, Batz was one of those rare artists to whom the cliché really applies: To him, creativity was as natural as breathing, eating, and sleeping. Unfortunately, ease of production doesn't necessarily lead to inspired results.

The Cleveland Artists Foundation is showing David Batz: An Impassioned Journey, a retrospective exhibition of Batz's sculpture, prints, and pottery. The show's primary value is that it takes us into the mind-set of one particular artist, thereby giving us an understanding of the hit-or-miss nature of artistic activity in general. Some artists insist that they do not wait for inspiration (if they had to do that, they say, it would be a long wait). Rather, they are like the wily old fisherman who wakes up every morning at the same time and casts his net, hoping that the fish will bite. That is, they work at their craft diligently, and if they are rewarded with inspiration, that is a bonus. The important thing, according to this view, is never to stop casting the net.

Batz never stopped casting his net. For example, he experimented, making small sculptural constructions and artist-made papers. Also, in addition to creating the functional pottery that was his bread and butter, he added glazed ceramic pictorial reliefs and sculptures to his repertoire. All the while, he taught -- at the Cleveland Institute of Art and at Case Western Reserve -- and even co-directed a Little Italy art gallery, where he championed the work of local artists. Furthermore, he received an Ohio Arts Council Individual Artist Fellowship and exhibited in several May shows at the Cleveland Museum of Art. His life journey, the title of the show tells us, was an impassioned one, and his energetic engagement in Cleveland's artistic life certainly bears this out.

But what about the work itself? Batz was prolific, but are the results of that process distinctive? Judging from the 85 works here, the answer is no.

The conceptual underpinning of this show might be described as late-'60s psychedelia, with an overlay of Eastern philosophy, topped by a heaping dose of Jungian psychology. At the time of the Tet Offensive and the Summer of Love, young artists all over the country were into this sort of thing. They avidly painted images of the Buddha, signs of the zodiac, and cartoon-like evocations of popular culture. Their mixture of high and low, of idealism and pessimism, was a response to the cultural ferment of the time and, if the mainstream art world didn't really take it seriously, other young people did, and they liked to see this stuff on album covers and on the posters that they hung in their college dorm rooms: art to get stoned to. It is lamentable that, while Batz was constantly evolving as a craftsman, his subject matter -- at least for much of the work here -- was mired in a late '60s sensibility.

For example, there are the "Odyssey Graphics Series" that the artist created in 1993. In these prints, he attempts to link his lifelong thematic concerns in an integrated artistic vision. The result looks like something that could have performed yeoman's service as an album cover for a psychedelic rock band circa 1968, but, at a remove of 25 years, now seems pretty insubstantial. It might be said that Batz undertook his "Odyssey" with tongue firmly in cheek. If that were the case, the time capsule feel of this series (if Martians wanted to know what the late '60s on Earth were like, what images would we show them?) would have some point. Gurus like Deepak Chopra have made journeying to the East, and into our collective unconscious, newly hip, and wouldn't it have been perceptive of Batz, in 1993, to telegraph this relatively recent trend?

Even if Batz, in these works, did anticipate a cultural phenomenon that would take off soon after he died, the work is so earnest and academic that his foresight doesn't amount to much. After the 1980s --a decade of greed, in the opinion of many -- it would not have taken a rocket scientist to predict that shortly the pendulum would swing, and that people would want to devote increased energy to more inward pursuits.

So, what is the "Odyssey" series really all about? In the prints, we see lunar landscapes, floating houses, and images of Marilyn Monroe. Lightning pierces outer space. There are images of David and Goliath, Adam and Eve, and signs that read "Do Not Enter." The world, Batz might be telling us, is so full of hate that maybe we ought to abandon it, focus our attention on outer space, and take there the ideas that are worth preserving. Batz does not reject the past entirely: The image of Adam and Eve, for example, is the one that Jan Van Eyck painted around 1432. What seems to be important to Batz is a quest for renewal -- to lay the groundwork for a better future by assembling archetypal images.

Unfortunately, the juxtapositions are not original, and the work, ironically, has a dry, academic flavor, in spite of its late '60s trappings. For example, the image of Adam and Eve floating in outer space is a tired sci-fi convention. The occurrence of lightning in outer space is violence of a kind but, we seem to be told, it's natural violence, not man's, so perhaps we're supposed to think about the difference. When we see Marilyn Monroe floating among the stars, perhaps we're meant to think that pop culture is also worth preserving. And so on. You can decode the combinations at your own pace, but the question is whether that will be time well spent. The more time one spends with art like this, the less interesting it becomes.

The best work in this show sticks with being functional, and avoids the "philosophy." Batz's stoneware pottery is not much in evidence in this show, but the little that is included speaks of his devotion to his raw materials and his ability to produce works of simplicity and elegance. In this category are four pieces -- two vases, a centerpiece, and a bowl with his trademark Ball Blue glaze. The porcelain pottery in his "Reflection Series" is technically accomplished, but it is also garish and often has a cluttered feel. The so-called architectural wall sculpture, a piece from his "Odyssey Sculpture Series" fashioned from extruded, hand-built earthenware with luster glaze added, is not very architectural. It is littered with decorative filigree that doesn't serve any structural function. True, the structure on which the piece is based resembles, in its rounded shape and Greek-inspired columns, an architectural monument such as the Roman "Temple of the Sibyl" from the first century B.C., but all the new flourishes (not least the gold-colored glaze) bring diminishing returns.

The Batz retrospective is a disappointment. This artist never stopped being an artist, but what he created often has a slapdash, uncaring feel. During a career that spanned more than 20 years, it doesn't seem that his vision became deeper or richer. He did create a lot, though. It's a faded notion -- descended from 19th- century Romanticism -- that everything an artist touches is of some value, just because he has touched it. Perhaps this was Batz's view.