My Dharma will go to the land of red-faced peoples

Psychotherapist Joseph Sestito, of Northfield, might be on to something with his new book, Write for Your Lives (Watkins Publishing, 2009, 172pp., paperback, $19.95). In it he applies principles of Buddhist though and cognitive behavioral therapy to one of humanity’s most primal urges—to write a book. 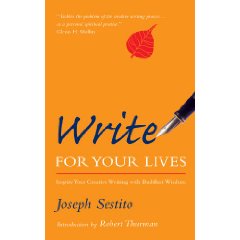 “I’m a psychotherapist, treating people who were depressed,” Sestito told me in a recent conversation. “When I treated creative types, I found that they were not only getting over their depression, but being enriched in their creative lives. So I began to apply the same principles to creative writing.”

Anyone who has been through cognitive therapy will recognize the ways in which we try to talk ourselves into and out of harmful behavior. Sestito’s book is partly an application of those strategies to your writer’s block, procrastination, and the myriad stresses and insecurities writers put upon themselves, which have the effect of psyching themselves out of the job at hand.

After some introductory matter, Sestito gets down to business with a chapter called “Cognitive Distortions and Root Delusions,” which are the terms which psychotherapists and Buddhists, respectively, use to describe the mind tricks we play on ourselves. Later, in a chapter called “Liberating your Writing and Living through unconditional Serenity,” he takes up the need to free oneself from “the eight worldly addictions” because of the destructive cycle of unhappiness they can cause—a cycle Buddhists call “samsara.”

Later parts of the book include worksheets and checklists to guide a person through the writing, manuscript preparation, and submission process.

Writers who are Buddhists, or who are at least open to Buddhist principles, are likely to find the book helpful. Those who are not might be put off by religious overtones. Sestito urges against writing “trashy fiction” or a “fuck book,” for example, because even though it might only be fiction, our brains have “mirror neurons” which through the reading of such things could cause the accumulation of “a small amount of negative karma that will negatively affect them in this or their future lives.” His reading list, first among the “Sources of Transcendent Wisdom for Living and Writing” (Chapter 8), begins, “Not just any reading, but the reading of the work of supremely accomplished practitioners such as the work of His Holiness the Fourteenth Dalai Lama, Lama Zopa Rinpoche, Lama Thubten Yeshe, Llama Tongkapa, Trungpa Rinpoche, Sogyal Rinpoche, Pabongka Rinpoche, and others . . .”

To a Buddhist, such a reading list might make perfect sense. To someone who does not practice Buddhism, such advice makes the book seem more about buddhism than writing.