'My Fair Lady,' Now at Playhouse Square, is a Delight for all the Senses 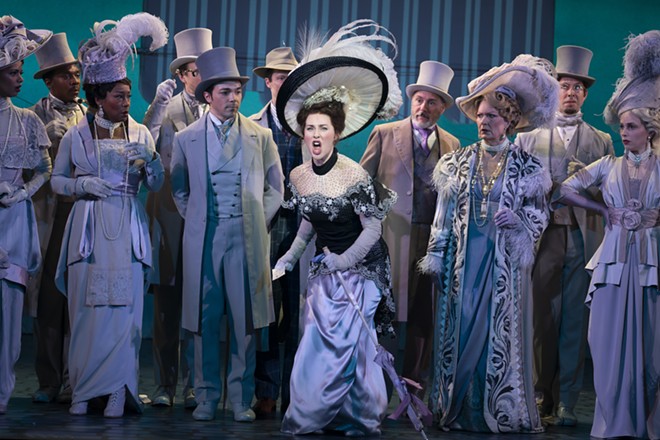 Ahhh, love! Is there anything more romantic than falling in love with a person who would be perfect if only you could change one or two—okay, several—aspects of their appearance and/or personality? Who among us hasn't wished for the power to transform our beloved into the ideal as we'd like them to be?

No other stage show captures that longing quite like the Lerner and Lowe classic "My Fair Lady," now strutting its impressive stuff at Playhouse Square. In this touring Lincoln Center Theater Production, directed by the estimable Bartlett Sher, the well-loved musical adaptation of George Bernard Shaw's "Pygmalion" is a sumptuous musical theater experience, even with a wrinkle or two.

Of course, Professor Harold Higgins doesn't start off in love with Eliza Doolittle, she is merely a pawn in a gentleman's bet he makes with fellow linguist and temporary houseguest Colonel Pickering. Higgins claims he can take the filthy, squealing mess that is the gutter snipe Eliza and turn her into the very model of an upper-class lady of distinction. He plans to effect this transformation by imbuing Eliza with the gift of proper (that is, ahem, upper class) speech.

As Eliza, Shereen Ahmed begins as a tight bundle of resentment but when she finally catches onto the lingo Higgins is pushing on her, she blossoms into the woman of Higgins' dreams. But will it be her dream as well? Along the way, Ahmed nails the iconic songs: her pre-transformation "Wouldn't It Be Loverly," her feisty battle cry, "Just You Wait (Henry Higgins!)," and the rapturous "I Could Have Danced All Night."

In the role of taskmaster Higgins, Laird Mackintosh is every inch the fusty researcher and scholar, inflated with pomposity and beset by a hugely inflated view of himself and the male of the species in general, expressed in his pointillist rendition of "I'm an Ordinary Man."

Most of the activity takes place on a magnificent two-level turntable designed by Michael Yeargan representing Higgins' residence. It rotates as the actors move briskly from Higgins' cloistered study equipped with a well-used spiral staircase, to the house's entryway, to a shower room. Additional locations include the street corner where Higgins first spots Eliza and her low-life father Alfred along with his irrepressible cohorts, and the Ascot Club where a gaggle of race observers, gowned and tuxed in gloriously lush white-on-white costumes, primly cheer a horse race until Eliza slips into her former persona and shouts "C'mon, Dover, move yer bloomin' arse!"

Alfred (Martin Fisher, packing an awesome bass voice) is usually portrayed as a jolly, boozy rascal, but in this staging, he comes across as more of an outlaw. Wearing a scowl and a skintight leather skullcap, Fisher looks like a Ving Rhames double from "Pulp Fiction" He does a fine job of revising our take on daddy Doolittle, but many of his reactions are a half-beat off and feel pre-programmed rather than responding in the moment. The same is true, to a lesser degree, of Kevin Pariseau's performance as Pickering.

Among the smaller roles, Sam Simahk as Freddy delivers the goods with his lovely tenor voice in "On the Street Where You Live;" Leslie Alexander exudes blessed rationality as Higgin's mom, tending to Eliza's frustration with her son; and Gayton Scott manages to carve out laughs as the ramrod stiff housekeeper, Mrs. Pearce.

Some have dubbed "My Fair Lady" the "perfect musical" since it is not the kind of sappy "moon-June" romance that gets stale over the decades. Thanks to Alan Jay Lerner's witty book and lyrics, Frederick Lowe's lush score, and Sher's spot-on direction, this production rises to the top. And it does so without a traditional love story, a comedy lead, or de rigeur kickass dance numbers for a chorus of 40, "My Fair Lady" is simply a delight for all the senses, right down to the perfect downbeat ending.