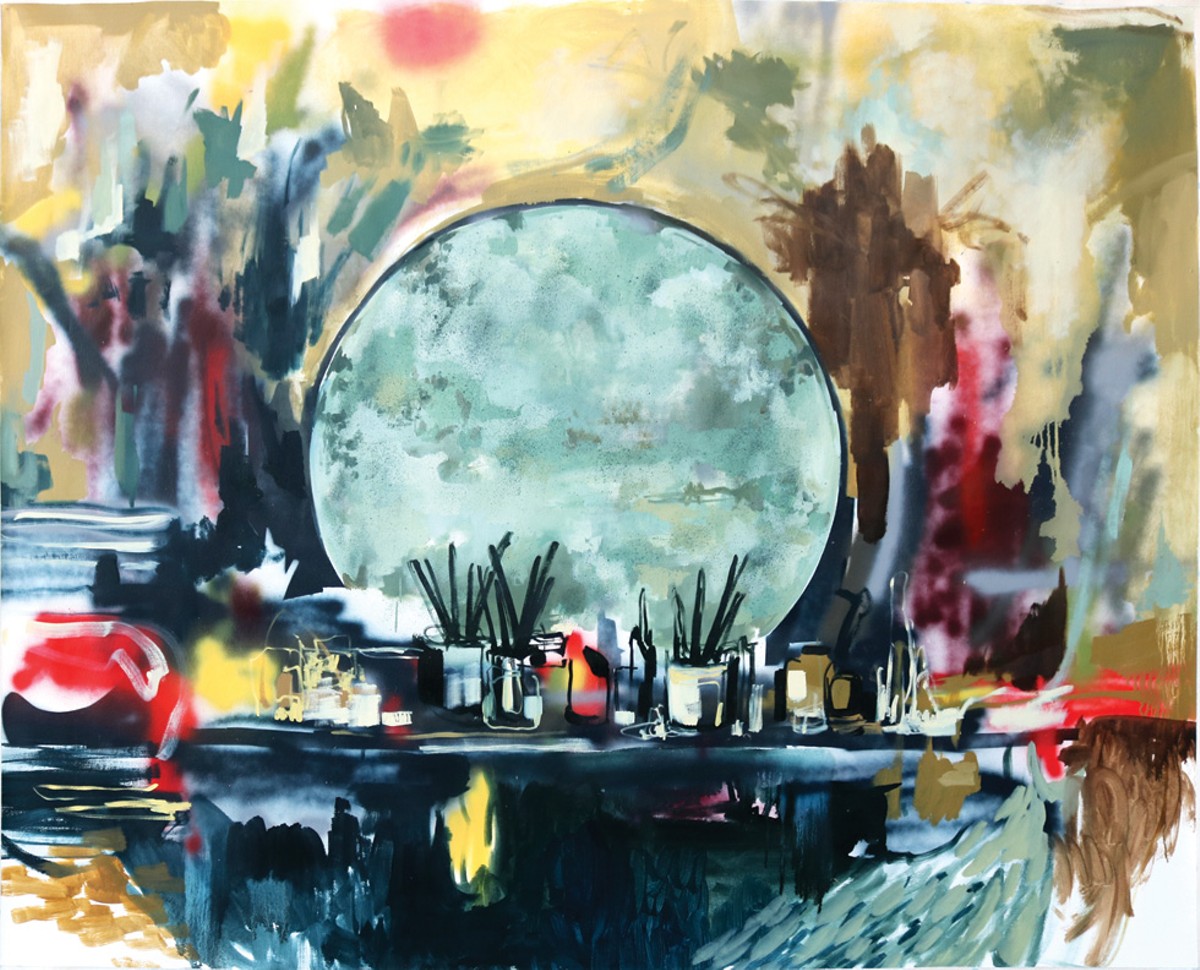 ”Study for a Portrait of the Artist”

Juicy colors and high luxury are the first impressions gathered from Nikki Woods' latest two- and three-dimensional work in Regrets Only.

A gold-trimmed chandelier welcomes us into the gallery, and like Rosalind Russell's Auntie Mame, its sparkling personality looms large. The light fixture hangs directly over a mid-century modern table peppered with porcelain slipcast Jell-O molds. These swirling and stacked beauties in sage, salmon, periwinkle and mauve are so succulent they might even compel this writer to change her tune regarding the gelatinous confection — despite a well documented revulsion toward the same.

Woods, who collects the home and garden cookbooks that were so programmed into the white, suburban female persona, has us falling through the looking glass of high style, desire and false impressions. It is this conflict that Woods aptly focuses on throughout these latest artworks.

As we stride past more gelatin molds mounted atop flat mirrors on pedestals, ribbons cascade down from the gallery ceiling behind each in such a way we feel like we're about to snort lines of piped cake icing with Betty Crocker. The artist explains, "The mirrors have to do with how we view ourselves, but all the mirrors in my show in a way deny the viewer the ability to view themselves. The mirrors in the paintings are representations of mirrors and deny the reflection of anything; the mirrors under the Jell-O molds are not placed to reflect the viewer. These are all illusions, or mirages of desire — I guess smoke and mirrors. A deception."

Using spray and oil paints, Woods creates atmospheric and fragmented dreamscapes that break down the hubris of her subject matter, as well as how we reflect upon them and ourselves. In "Manhattan Triplex," Woods portrays Donald Trump's opulent dining room table as translated from Jaime Ardiles-Arce's 1985 photo from Architectural Digest. Painter Francis Bacon's cramped and chaotic studio space holds part of the source material for "Study for a Portrait of the Artist." Both oeuvres take on Trump's and Bacon's extravagance-based lifestyles with the mirrors and shiny objects as well as the gamut of hues, tones and sharp lines of their larger-than-life personalities. Smoke and mirrors, indeed. "The Trump apartment painting reminded me so much of something out of the American Psycho set design, this portrait of 1980s capitalism," she adds.

Well positioned in its spot adjacent to "Study for a Portrait of the Artist" is a painting with elements of a Ouija board. To Woods, the Ouija board is not only a tool for inviting spirits into the space and conjuring the invisible, but is symbolic in its own right. She confesses that she is obsessed with ghosts. The artist hadn't originally intend them to be presented together, but it fit with the symbolism of Bacon's studio. "He's a dead painter whose history we all contend with as painters," she states, "Who am I to conjure in the studio? What am I attempting to conjure for the viewer?" It is probably the most somber of the paintings in Regrets Only, with its heavy gray and black skyline landscaped above a secondary color sea, but it fits.

While we were taking in probably our favorite artwork in the show, we noticed Lucy in the Sky with Diamonds whispering through the background. The painting, titled "Pineapple Face," holds a mannequin head form sporting a pageboy-cut wig. Hearkening back to Woods' Jell-O molds, sliced pineapple eyes with sickly sweet maraschino cherry pupils return us to those ever-popular additions that were held prisoner in congealed salads. With a quick pink wide grin from one non-existent ear to the other, "Pineapple Face" is a subtle mirror for feminism. Is it strength or sadness that boils and caramelizes underneath its sugary veneer?

In a show that could be overwhelming with color and subject matter, Woods, an established Cleveland artist, manages to put together a tight collection in this first solo exhibition at Hedge Gallery.