Colin Beavan’s No Impact Man: The Adventures of a Guilty Liberal who Attempts to Save The Planet and the Discoveries He Makes About Himself and Our Way Of Life In The Process (Farrar, Straus and Giroux, September, 2009 288 pages, Hardcover, $25) promises something big in the drama of its title, and the promise has certainly sparked some criticism by people who have read the book and decided he hasn’t added anything new. 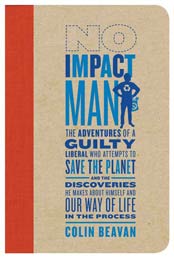 Well, indeed he hasn’t really added anything new in the way of strategy or our understanding of global warming or that great big toilet style swirl of plastic in the pacific, or anything else. When his idea—to attempt for a year to make zero impact on the planet—began to get attention through his blog, media quickly began to pick up on the apparent absoluteness of that promise (No Impact) and to lob criticisms (like the valid point that the book is more about making the author famous than it is about saving the earth) or trivializing headlines, like the New York Times’ beauty, “The Year Without Toilet Paper.”

But of course the Times wrote its potty-provocative headline for the very same reason Beavan conceived his hook: to get readers’ attention. And if getting attention to his effort were his ultimate goal, that’s actually not such a bad thing.

No Impact Man—which is also a documentary, released concurrently with the book, is like a reality show for enviro-monks: No car, no electricity, buy nothing new, use nothing disposable, especially no take-out food packaging, buy only food grown within a couple hundred miles, and so on. He does ease into it over the course of a few months.

And a critical look is certainly rewarding: Colin Beavan allows himself all kinds of judgment calls that undercut the idea of zero. He allows occasional deviations on just about every front, whether it be social coffee (coffee doesn’t grow in New York, and so to have a cup of joe, he has to participate in commerce that involves shipping beans from around the globe via petrol burning ships and trucks) or the fact that he doesn’t come up with a way to cook with renewable fuel, or any number of other little breaks our hero takes with his remarkably tolerant and willing wife and child.

And it is even more important that the significant reductions he is able to make in his environmental impact—for example, life without a car—are made possible largely by living in a big city (wherein just about anything he could possibly want is within easy bicycling distance) and by his self employment as a writer (which allows him to have a flexible schedule and to make his day-to-day life a part of that work).

He couldn’t do this if he lived in Solon or Avon, or if he were an attorney working at a big firm that required him to be at work and wear a suit all day, every day. The small degree to which he addresses the advantages inherent in his situation are a significant shortcoming.

But Beavan has hit upon an intriguingly quixotic challenge, a little like a dietary fast. The payoff is two-fold:

First, the attention he draws to the effort is a good thing, even if he doesn’t make any discovery or substantively add to our knowledge of how to live in a way that is more mindful of the need to sustain our planet. Humans conceive superheroes to give us a standard to look up to, and No Impact Man—at least the idea of him— sets the environmentally sustainable bar pretty high.

And second, there is something in taking up the challenge. How many people criticizing Beavan for his many shortcomings have actually tried living without a car, raising a child without disposable diapers, buying almost no take-out food, buying nothing new, and turning off the electricity for a year?

No Impact Man will not save the earth at the end of this episode. But it might motivate a few more people to try.