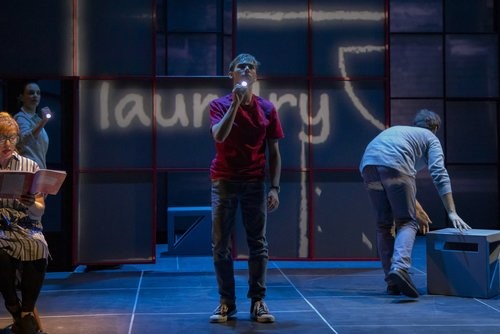 Steve Wagner
The Curious Incident of the Dog in the Night-Time at Beck Center for the Arts.

In today's world, we all must deal with sensory overload, from too many TikToks on our screens to excessive images of Donald Trump on the TV. But when a person is neuro-divergent—on the autism spectrum—sensory overload can be triggered by the most seemingly mundane events.

In the daring and compulsively intriguing play "The Curious Incident of the Dog in the Night-time," Simon Stephens has adapted the eponymous novel by Mark Haddon to create a theatrical overload that many will find arresting. The Beck Center for the Arts production, as directed by William Roudebush, demands a lot of the audience as well as the performers, and it generously rewards those patrons who make the effort.

Set in Swindon outside of London, England, the play begins with a deceased dog impaled on the tines of a garden fork. The poodle was the pet of Mr. Shears who lives next to Christopher Boone, a 15-year-old autistic boy who happened upon the sad scene. Instantly, Chris is obsessed with discovering who committed this heinous act, and his journey along that path unfolds a mystery unlike any other.

While Chris's particular location on the autism spectrum isn't defined, he exhibits many of the traits common to that condition. He is a brilliant mathematician, likely due to the fact that numbers are stable and clearly defined. Chris also has a repetitive monotone manner of speech, often emphasizing the last word of any phrase or sentence, perhaps in an effort to turn words into predictable and less threatening units of sound and thought. He also repels any physical touching and withdraws from any situation that feels hostile or out of control by sometimes curling into a fetal position.

His doting father Ed (Terrence Cranendonk) does what he can to help his son while trying to protect him, sometimes in ways that turn out to be less than effective. Soon, Chris discovers that his father lied about what happened to his mother Judy (Katherine De Boer) and other things, sending Chris on the track of truth along with the canine culprit. That journey takes him to London and a whole new galaxy of stimulations.

The story is told through Chris's narration and by his sympathetic teacher Siobhan (Khaki Hermann), who reads from Chris's notebook that he filled with observations on the mystery and his family.

But that is only part of the storytelling, since a team of exceptional theatrical lighting, sound, and projection designers create a compelling universe where Christopher's mind is free to wander. There are many predictable straight lines and sharp edges in the scenic design, but they open into screens that show the night sky and even animations of a black hole whirling and expanding. It adds up to a replication of Chris's mind, hemmed in by his need for stability as his brain scans the multiverse for another, larger meaning.

The play is enhanced by a chorus of six agile actors who take on multiple roles and perform as a force multiplier of Christopher's thoughts and emotions. They are: Nanna Ingvarsson, Dayni Mahar, John Busser, Daniel Telford, Jenny Boswell and Adam Hass-Hill.

Of course, this play doesn't go anywhere without a superb Christopher, and Beck has the real deal in the neuro-divergent actor Maurice Kimball IV. Kimball is on stage for almost the entire time, and he never misses a beat as he explicates every nuance of Chris's talents and his mental condition with specificity and tenderness. It is a remarkable performance.

This is a mystery play that poses questions far beyond "who done it?" And that makes it a must-see for those who enjoy being challenged while also being masterfully entertained.

The Curious Incident of the Dog in the Nighttime, through Oct. 16 at Beck Center for the Arts,