New club laces up for some serious foot action. 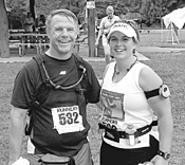 The shape of things to come: Cleveland Fit works up a sweat with its running group.
SAT 4/23

Cleveland Fit founder Nicole Davis is no athlete. On most days, she'd rather read a book or watch TV.

But when her husband talked her into signing up for the national running club's Houston chapter a few years ago, Davis discovered that there were other novice marathoners who were determined to finish a race. "It was very difficult for me at first," recalls Davis. "We always came in last, and sometimes the walkers beat us back. But after six months of training, we completed the Houston Marathon in 2003."

Last year, Davis's sales job brought her to Northeast Ohio, where she and her husband started the Cleveland chapter. During the 25-week training season between April and October, club members are divided into five color-coded running and walking groups, depending on how fast each one can cover a mile. "Unlike anything else in life, no one can do it for you," says Davis. "So, when you finish, you are the entire reason. I am living proof that anyone can do it." Cleveland Fit meets at 8 a.m. Saturday at the Harriett Keeler Memorial Picnic Area of Brecksville Reservation (on Chippewa Creek Drive off State Route 82 in Brecksville). Seasonal fees are $65 and $80; call 216-274-9207. -- Cris Glaser

Dog Day Afternoon
The Aeros welcome some furry friends to the game.

At Sunday's Bring Your Pet to the Park Day, fans and their four-legged pals are invited to watch the Akron Aeros take on the Altoona Curve. Anything to get folks to watch minor league ball, sighs team spokesman James Carpenter. This season, the Aeros are managed by Indians farm-system vet Torey Lovullo, who was named Carolina League Manager of the Year in 2004, after he led Class A Kinston to the championship. But Carpenter isn't promising similar results for the Aeros. "It's tough to gauge how well a Double-A team will be in a given year," he says. "Wins are nice, but player development is the top priority." The Aeros play Altoona Thursday through Sunday at Canal Park, 300 South Main Street in Akron. Game times are 7:05 p.m. Thursday and Friday and 2:05 p.m. Saturday and Sunday. Tickets range from $7 to $10, available by calling 330-253-5151. -- Chad Felton

Move to the Music
The House of Blues is ground zero for a new run.

The inaugural Hermes Cleveland 10 Miler on Sunday is "a great warm-up to the marathons in May," says spokesman Neal Neroni. The race -- which also includes a Fleet Feet 5K and a kids' run -- starts at House of Blues, jaunts over a pair of bridges (Carnegie and Detroit-Superior), heads to Browns Stadium, and winds up back at HOB. That's music to Mo Loesch's ears. "I just delivered my second set of twins," she says. "Plus, I recently turned 40 and want to get back into pre-twins shape." The first race starts at 9 a.m. at House of Blues, 308 Euclid Avenue. Registration ranges from $12 (for the kids run) to $50 (for the 10 Miler). Call 216-623-9933 for more info. -- Lucy McKernan

Participants at Saturday's Grand River Canoe & Kayak Race couldn't care less how well their vessels perform. It's how they look that matters. "I've seen folks dressed as the Blues Brothers, nuns, cowboys," says race director Brian Davidson. "[One guy] shows up with his own bagpiper." Races start at 9 a.m. at Harpersfield Dam (off Harpersfield Road, near State Route 534 in Geneva). Entry fee is $15; call 800-669-9226. -- Lucy McKernan