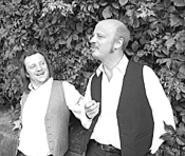 Allen Branstein (left) and Andrew Narten play dimwit hit men in Charentons Absurdity in the Streets.
Absurdity in the Streets -- Charenton Theater lights up late summer evenings with three classic absurdist pieces (presented separately, one per night). While the production results are somewhat mixed, there are some spectacular moments when these comically pessimistic visions mesh insightfully with our seriously akimbo world. The Bald Soprano, by Eugène Ionesco, is a sweet symphony of conversational drivel that builds, one banal comment and meaningless story at a time, until the entire tower of babble comes crashing down. It's all utterly without meaning except, of course, for the larger concept that the waves of words we exchange each day often do more to separate us from other people. No Exit, by Jean-Paul Sartre, is the flagship of absurdism, featuring the most telling idea of all: Hell is other people. In it, each of three deceased characters come to realize that each is the other's eternal torturer. The Dumb Waiter, by Harold Pinter, explores the dynamics of communication and worker/boss power games by focusing on the quibbling of two lower-class hit men awaiting orders from their unseen leader regarding their imminent next assassination. The interchanges between the two characters are handled well by director Mindy Childress, but there's not enough tension created in the silences that lead to the surprising denouement. Presented Aug. 26-28 at Edgewater Park; go to www.charenton.org. -- Christine Howey

It has been claimed that there's a gene in some people's DNA spiral that compels them to seek out risky, potentially harmful activities, such as rock-climbing, deep-sea diving, and parking at expired meters in Cleveland Heights. True to their risk-adoring genes, the seven-member group titled Oliver Twisted (made up of former members of the now-defunct Second City Cleveland) does audience-inspired material exclusively, without the safety net of scripted modules. And thanks to a fortunate blending of physical types and personalities among the performers -- along with their determined insistence on yanking every loose comedic thread -- this is an improv experience that will leave you laughing far more often than wincing. The troupe's resident nutcase, Randall Harr, is a fairly normal-looking fellow who transforms into a maniacally, often hilariously intense embodiment of whatever animal, vegetable, or mineral he's been assigned. Mondays at Hilarities Comedy Club at Pickwick & Frolic, 2035 E. 4th St., 216-736-4242. -- Howey
Scroll to read more Arts Stories & Interviews articles
Join the Cleveland Scene Press Club