One Nation, Under Goth

Spy revels in gloom once a month. 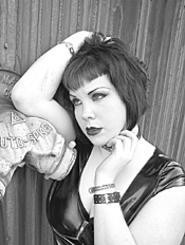 In DJ Miseri's Necropolis, she's the dance-floor force behind all the industrial synthpop. A staple on Cleveland's goth scene since 1997, Miseri spins every fourth Wednesday at Spy. While she's in the main-bar booth, DJ Haz-Mat (from Bowling Green) is turntabling electro-industrial tracks in the Powernoise Room downstairs. But the real attraction is the crowd clad in black. "Generally, it's very similar to the punk culture," explains Miseri. "People are attracted to this certain musical style and fashion."

And cocktail. The drink of choice is either the black vodka Blavod or the herbal liqueur Chartreuse -- a "culty kind of drink" made by French monks. Mix the alcohol, clothes, and music together, and you've got yourself one classic gothfest.

Says Miseri, "You have people like me, who are into the older goth music of the '80s -- and the romantic side, with Victorian clothing. Then you have people into Powernoise, who wear big, stompy platform boots. Then there are the cybergoths, who wear neon colors and glue cybernetic things on their faces. But we all have similar interests." Necropolis happens from 10 p.m. to 2:30 a.m. Wednesday at Spy, 1261 West 6th Street. Admission is $5 for 18- to 20-year-olds, $3 for everyone else; call 216-621-7907. -- Cris Glaser

Space Oddities
NASA has some fun with the cosmos.

Of all of NASA's Great Observatories, the Hubble Space Telescope captures the spookiest sights. Just before Halloween last year, its infrared lens spotted a masked cloud of newborn stars. Nestled behind a distant cluster of galaxies, the image resembled a galactic ghoul, with two hollow eyes and a gaping mouth letting out a silent scream. The discovery is one of the stories that unfolds at the space agency's daylong workshop on how the Hubble, Spitzer, Compton, and Chandra observatories are revolutionizing astronomy. When you're not listening to tales of spinning black holes and halos of dark, gaseous matter, there's always the digital-photo booth: Step inside, and let the photographer snap a shot of you floating in space. The free event runs 10 a.m. to 3 p.m. Saturday at the NASA Glenn Visitor Center, 21000 Brookpark Road. For information, call 216-433-9653. -- Cris Glaser

Rare is the film that caters to fans of rabbits, motorcycles, Gordon Lightfoot, and fellatio, but now, thanks to Vincent Gallo's Brown Bunny, we've got that demographic nailed. Gallo plays a miserable motorcycle racer traveling from New Hampshire to California to meet his sweetheart (Chloë Sevigny) in perhaps the most authentic -- and anesthetizing -- drive across America ever filmed. And in a bland motel room, Sevigny goes down . . . in cinema history. Without the brief, graphic scene, the movie would probably get a PG rating; with it, it gets our attention. The Brown Bunny is at Cleveland Cinematheque (11141 East Boulevard) at 7:30 p.m. Friday, 10 p.m. Saturday, and 9 p.m. Sunday. Admission is $8; call 216-421-7450. -- Gregory Weinkauf

The InterReligious Task Force on Central America holds its annual Cleveland Vigil to Shut Down the SOA (School of the Americas) on Sunday. Initially created to honor missionaries killed by U.S.-trained guerrillas in 1980, the event has since become a free peaceful protest "to pray for an end to torture," says spokesman Brian Stefan-Szittai. It starts at 3 p.m. at North Presbyterian Church, 4001 East Superior Avenue; call 216-961-0003. -- Lucy McKernan