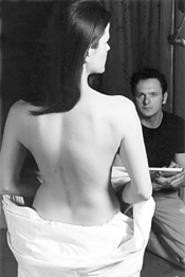 Amelia shares her "backstory" with Winston.

Pssst! Hey, you wanna see a completely naked man and woman onstage? Yeah, for real! "Totally nude," like the signs on strip clubs say. There's just one catch: You gotta listen as they sit and talk about art and love and pregnancy and stuff. After that, they put on their clothes again. But for a few minutes they're freakin' naked!

Ahem. Now that we have that out of the way, it should be noted that the somewhat notorious nude scene in The Credeaux Canvas, now at Ensemble Theatre, is nicely understated and tastefully done. This distinguishes it from the rest of the play, which is a long trek across implausible dramatic terrain, accompanied by actors who seem to be competing to see who can devour scenery the fastest. The Keith Bunin script, although rarely capturing anything close to natural-sounding dialogue, offers a few intriguing ideas regarding how people misperceive each other and the cruelty of dreams denied. But the performers, directed either carelessly or mistakenly by Lucia Colombi, sabotage whatever is salvageable in the material by refusing to underplay anything.

The story itself is promising enough. An aspiring but marginally talented painter, the semi-geeky Winston, shares a seedy Manhattan flat with apparently bipolar Jamie, a down-and-out real estate agent, and Jamie's girlfriend Amelia, a struggling singer. After Jamie is aced out of his art-dealer daddy's will, he gets the idea to have his roommate whip up a fake nudie painting by a long-dead French impressionist, Jean Paul Credeaux, and sell it to one of his father's rich but clueless clients. Winston and Amelia sign up for the scheme, and soon he's painting her in Credeaux style as she poses in the buff. He then strips, to make Amelia "feel more comfortable" -- a gesture that she, to her credit, finds ridiculous. Anyhow, they're nude -- did we say totally naked? -- and after sharing their personal backstories (she's newly pregnant with Jamie's child, Winston's a boring artist dweeb), they decide to get jiggy with it.

Up to this point, the good ship Credeaux is still afloat, despite a gush of sophomoric art babble from Winston and Amelia's abrupt transfer of affections. But when Act Two begins, the whole enterprise starts sinking fast, and there's no steady hand on deck to save it. Jamie brings the art collector Tess up to see the forgery, and instead of being a well-heeled know-nothing, she starts dissecting the painting with the laser-beam insight of a Smithsonian curator. First she determines that the painting is a fake; then -- eureka! -- she discovers that the young woman in the painting is pregnant. Stop rolling your eyes -- it gets worse. In quick succession: Jamie rejoices at the news that he's a father-to-be, Amelia bursts in and blows the con, Tess storms out after buying one of Winston's incompetent originals, Amelia tells Jamie she loves Winston, Jamie slugs Winston and then slinks off, Winston turns his back on Amelia, who moves to the suburbs and becomes a grade-school teacher, and . . . oh, forget it.

Perhaps the playwright's convoluted scenario, with all its tortured logic, could have been saved by a deft group of actors. But alas, that is not to be. Michael John Sestili's Jamie is egregiously off-kilter. Giving every indication that he's a graduate of the Little Rascals' School of Acting, Sestili conveys dejection by slumping his shoulders, shuffling listlessly, and frowning like Alfalfa after he gets dumped by Darla. His other moments are equally nuanced. Caise C. Rode has a few decent scenes as Amelia, but she also screams to excess, mugs, and overcooks her melodramatic lines. Sherri Britton does slightly better as Tess. For contrast, Joel Nunley's Winston is more laid-back; however, he repeatedly stumbled over his lines and insisted on pronouncing every scripted "um" with deliberate certainty.

Listen, it's not all their fault. You try delivering such melodramatic tripe as "You have me in the palm of your hand -- make a fist and you'll crush me!" Playwright Bunin also throws in a couple of "surprises," but anyone who's still awake after the nude scene (totally naked, mind you) will see them coming a mile away.

Note: This is Ensemble Theatre's last production at its current location, and we hope they find a secure home soon. Ensemble provides an important venue, and the company's many hits (and its occasional misses) should continue to be a vital part of the Cleveland theater scene.