Dream a Little Dream tells only one side of the Mamas & the Papas story. 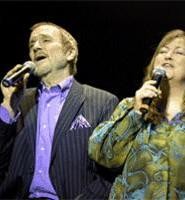 Denny Doherty and Doris Mason, trying to keep the dream alive.
Comedian Mort Sahl used to tell a story about a new book that had just hit the shelves. Its cover depicted a swarthy Prussian soldier, riding a wild-eyed stallion and bending down to sweep a nubile princess off her feet. The title of the book, in glossy red letters, was Passion of the Flesh, and under it was the subtitle: "Formerly published as Introduction to Bookkeeping."

Titles and subtitles can be quite misleading, and this is the case with the new Play House production Dream a Little Dream: The Nearly True Story of the Mamas and the Papas. Papa Denny Doherty wrote this piece, and he's also the narrator, lead singer, and star of the show. The singing group that brought him heaps of fame, riches, and drugs was a smoothly blended quartet -- and unfortunately that's the element that's missing from this work. With his former singing compadres reduced to the status of backup singers, crooning softly in the shadows as Denny stands on the other side of the stage in his own spotlight, the group comes off more as just the Papa.

Doherty delivers his narration with wry irony and deflecting shrugs, as the anecdotes pile up like a series of Tonight Show appearances with Jay's questions edited out. Accompanied by still photos and film clips projected on the wall behind him, Doherty traces the chronology of his career, from his struggles as a folksinger from Halifax to his palace in Beverly Hills, where he submerged himself in gallons of top-shelf bourbon and various drugs of choice.

This is all punctuated by songs of the time, from a paean to the slain JFK in the folk classic "500 Miles" to a strange southern-drawl rendition of the Beatles' "Twist and Shout." Musically, everything perks along acceptably until the unbalanced foursome tries to capture the group's singular sound. As Doherty explains, when Mama Cass began singing with the other three, a "fifth member" of the band showed up. They called him Harvey, and he was the overtone that magically emerged when the group started cooking. Regrettably, except for a nice turn on "Go Where You Wanna Go," Harvey is not in evidence onstage.

Part of the problem is that Denny is in his mid-60s, and his voice can't sustain the pristine tenor that was his mark of distinction four decades ago. He can't be blamed for the ravages of time and Crown Royal, but he is responsible for focusing all the attention on himself instead of making John Phillips, Michelle Phillips, and Cass Elliot into real people. John and Michelle never actually speak in their roles, which may be some sort of Freudian payback. Graham Shaw, who sings John's part, never even gets to wear the funky, fuzzy knit hats that the original always favored.

Actually, the least successful part of the production is the way Doherty deals with his approach-avoidance relationship with Mama Cass. As the possessor of a shimmering silvery voice that was beautiful beyond all measure, Cass was a hall-of-fame talent surrounded by serviceable vocal journeymen. She also tipped the scales at around three bills, a turnoff to many people, including her heartthrob Denny. He candidly admits that he could never respond to her affection, and he seems duly remorseful. But since Cass doesn't speak for herself, we never gain a deeper sense of her as a person. Doherty ticks off her joys, pains, and funny getups, but this approach sparks no theatrical fire. Thus, the group that made lush pop-rock a major element of the feverish '60s music scene has been turned into three cardboard figures orchestrated by a PowerPoint lecturer.

In the role of Cass, Doris Mason shows off a powerful, bluesy voice, but she can't come close to the ethereal sounds Elliot created. If you're looking for Lisa MacIsaac, who supposedly plays Michelle, she's the one in the darkness, banging the tambourine on her thigh.

Director Randal Myler, who wrote and directed Love, Janis, the magnificent theatrical bio of Janis Joplin, certainly knows better than to allow one sporadically interesting fellow to dominate the stage for more than two hours. But Myler is hamstrung by this amateur playwright's clumsy and self-centered tribute to his own storytelling skills. While drug use is alluded to, we are never allowed to see the effects it had. And while Doherty's prolonged affair with Michelle led to various ruptures within the group, it's all related with the probing insight of a People magazine article.

The Mamas and the Papas aren't remembered as the most important singing group from that hippy-dippy decade, but they certainly deserve a more engaging "nearly true story" than this.