Parading on the Rain

Dobama steers clear of holiday cheer with a play worthy of celebration. 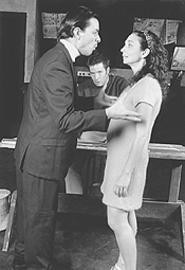 Jason Markouc, Scott Plate, and Laura Perrotta, perfecting their characters' imperfections.
While other theaters are about to render us bilious in Yuletide indulgences, the air on Coventry at Dobama is sweet and clear. Nary a whiff of candy-cane condescension, Scrooge's wails, or a boy soprano's noel.

Instead, there is Richard Greenberg's Three Days of Rain, which may turn out to be the season's greatest gift -- a testament to how invigorating live theater can still be. This fascinating 1998 chamber work is a stage equivalent of the doomed Faulknerian epics, such as The Sound and the Fury, where we see the guilt of one generation gradually infringing on the next.

The work draws us into a Freudian maze, a whodunit of the soul; instead of investigating a murder, it traces the heritage of maimed psyches.

Greenberg immediately captures his audience, throwing it into the heart of an emotional hurricane. A mysterious, world-famous architect has just been buried. In his desolate studio appears his lost son, played by Scott Plate as a magnificent masochist, a showman of pain and exquisite perversity. Within minutes he is engaged in an emotional tug-of-war with a fiercely tender but high-strung sister. As a flame to tantalize these two tortured moths appears the son of their father's dead business partner, a soap-opera star who specializes in enacting shirtless studs. He exudes the testosterone that elicits a cerebral triangle of just-below-the-surface sexual conflagrations.

A tantalizing mystery ensues: We find that the architect's father has left the house he designed to his associate's son. Seeking to discover the how and why of this seemingly vengeful bequest, the angry son, Ned, screams to the empty walls, begging them to reveal the father's mystery. From under the bed the late father's journal creeps up, with cryptic references to three days of rain, pointing to an enigmatic numbness, an insane wife's attempted suicide, and a business partner's early death.

Then the playwright pulls a devilish Freudian lollipop out of his satchel with a legerdemain worthy of Pinter. The magic of theater casts its spell, as the silent walls are allowed to give up their secrets. In the second act, the actors portraying children suddenly become their parents, reenacting the Freudian birth of the children's insecurities.

The mother is portrayed as a slightly dangerous, charismatic Southern belle -- a "less stable sister of Zelda Fitzgerald" -- constantly on the verge of nervous collapse; the father is an insecure stutterer, afraid to give vent to his genius. This gives the play a prismatic perspective, as though after watching Norman Bates stab Janet Leigh in the shower, we suddenly had a flashback to Norman's childhood, or, as in Hitchcock's Rebecca, we are suddenly privy to the first Mrs. DeWinter's evil machinations.

Greenberg's characters are lambent in their fabulous imperfections. Like F. Scott Fitzgerald's tarnished jazz-age angels, they exquisitely bask in their halos of regret. With references as diverse as Kitty Carlisle, Jeffrey Dahmer, and Cole Porter, the play exudes an erudition as enchantingly expressed as a Strauss waltz.

Director Sonya Robbins has superbly cast and orchestrated the show, and has the good sense to realize that, when working with fine crystal, one must apply a delicate touch.

Double-cast as parent and child, Scott Plate and Laura Perrotta have, just in time for Christmas, metamorphosed into flesh-and-blood incarnations of impassioned holy figures out of DaVinci and Caravaggio. Adding mirth to majesty is exciting newcomer Jason Markouc.