A legend in African American art gets his due at CMA. 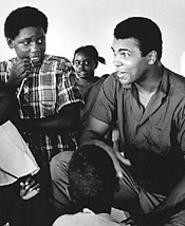 Gordon Parks was a photographer for Life, one of the founders of Essence magazine, author of The Learning Tree (as well as the director of the film adaptation), director of the blaxploitation classic Shaft, and composer of the 1989 ballet Martin. He is also the one who forged a legacy that eloquently depicts the soul, struggle, and aesthetic of the African American experience.

The true power of Parks's work, however, is its epic character. This aspect of timeless humanity is represented in Gordon Parks: Photojournalism, an exhibition beginning Saturday at the Cleveland Museum of Art. Featuring 17 vintage black-and-white prints, the series depicts 1940s Harlem, the 1960s civil-rights movement, and portraits of African American icons like Muhammad Ali and Malcolm X.

"This features Parks at his best," says Tom Hinson, the museum's curator of photography. "They are lyrical, poignant, political, and beautiful pieces. He's easily one of the 20th century's most important photojournalists and documentary photographers.

"And he's impassioned and resourceful, successful at getting his subjects' trust, regardless of their social or economic circumstances. That enabled him to record intimate and revealing portraits."

Parks, 89 and in frail health these days, wrote in his 1965 autobiography, Choice of Weapons, "I have come to understand that hunger, hatred, and love are the same wherever you find them, and it is that understanding that now helps me escape the past that once imprisoned me." Hinson agrees that experience has made a lasting mark on Parks's work. "He's got a great eye for composition and an inherent sense of design," he says.

"It's the combination of the formal photographic issues, coupled with his passion for the subject matter, that makes him one of the greats."