When it comes to silent films, pianist Philip Carli knows the score. 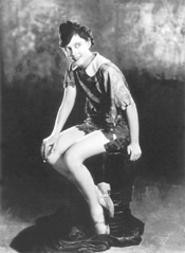 Peter strikes a classic -- but not timeless -- pose.
Peter Pan is a classic of the silent-film era, but don't call it a timeless classic -- at least not in front of pianist Philip Carli. To him, no film is timeless, and therefore a composer's score must match the film's own era. And there's no place for blistering guitar solos or kooky Wurlitzer organs in this 1924 masterpiece.

"Everything is an artifact," explains Carli, who will conduct the Flower City Society Orchestra at a screening of Peter Pan Friday at the Cleveland Museum of Art. "I've never believed that there's such a thing as a timeless work of art or a timeless film. You can date things to within a couple of years, just from looking at them. Everything is a piece of its time." And a period is most readily defined by its music.

Eight years ago, Carli founded the Flower City Society Orchestra in Rochester, New York, where he works in the public school system and continues doctoral work at the prestigious Eastman School of Music. An expert in the "vocabulary" of turn-of-the-century society orchestras -- the small ensembles the Great Gatsby would have heard play ragtime and light classical music at swank cafés or hotels -- Carli uses his orchestra to re-create the "pop" music of a bygone era.

"I'm not trying to make it sound period," Carli says, though the musicians do use period instruments. "My natural vocabulary as a composer is late 19th to early 20th century."

Scoring silent films came naturally to Carli. At age 13, he wrote a piano accompaniment for The Hunchback of Notre Dame, which he performed in front of his entire school. In the 25 years since then, he has scored over 60 silent films, but Peter Pan was the one that had always eluded him.

The tale he had heard since childhood is one of the silent era's greatest tragedies: With the advent of talkies, Peter Pan, like many other silent films, was destroyed wholesale -- except for a print that Rochester's Eastman House held onto. In 1995, with the help of the Walt Disney Corporation, the Eastman print was fully restored, and Carli was commissioned to provide the orchestral score. As always, he aimed to capture the era in which the film was created, as well as the inherent spirit of the movie.

"If [the score] was completely new, it would just point out how antique the film itself is," Carli says. "What you try to do is bring out the elements which are the same between that time and this. You really try to think how these people -- the actors and filmmakers -- looked at the story and try to come up with an appropriate accompaniment."

Carli describes the film as very theatrical (it was based directly on the stage version of Peter Pan) and very English. He thus used 19th-century English opera as inspiration for the score.

And after months of rehearsals, he still enjoys seeing it. "It's a very elegantly crafted film, and the whole thing works very, very well. And to hear the delight you get from an audience -- that's something I like to see happen with silent film presentation."