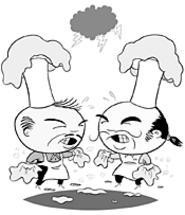 Jeremy Eaton
Tasty and inexpensive, pizza has made dinner as easy and economical as picking up the phone. "I know pizza's Italian, but America's got to take ownership of it," says "Crazy" Mike Lynch, owner of Ermanno's Three Guys Pizza, located in Louisville, outside of Canton. "It's good. It's cheap. And for years, they've delivered. It's really got everything you're looking for."

But what are we looking for? Choosing the best pizza from the scads of corner stores can be a crapshoot for any pie-loving patriot. Wouldn't it be easier -- not to mention more fun -- if local pizza slingers somehow battled for our love?

For eight years now, Canton's Pizza Challenge has given pizzerias the opportunity to do just that. Regional purveyors compete for top honors in five categories -- thick, thin, stuffed crust, best slice, and people's choice. As its name implies, the latter category is voted on by those who attend the event. To judge a truly professional pie, and if you're serious about your role as voter, pick up more than one slice at a booth to make sure the sauce and ingredients are consistent. And feel free to give vendors the evil eye if they skimp on toppings.

Pizza Challenge will occupy four blocks of Canton's Central Plaza. Activities include line dancing, rock-wall climbing, gladiator jousting, watching fireworks, or jamming out to bands. That's in addition to purchasing slice after slice (or even whole pies) at various booths.

"For a good pizza, you've got to put a lot of care into what you're doing," explains Mike Cricks, manager of Cricalino's Pizzeria in North Canton. "It has a lot to do with how you do your dough and sauce, but you've also got to put a lot of heart into it and enjoy making it."

Pizza samplers should consider the importance of fresh vegetables, hand-grated cheeses, unique sauces, and homemade dough. And don't forget to hit the beer truck to clear the palate between tastings. "Beer and pizza go almost hand in hand," says Lynch, who keeps a cooler full of brew at his pizzeria.

And just so you know, some pizzas may be prefabricated. Unlike some popular chains that ship their ingredients frozen, "We make our dough fresh daily," boasts Rose Hile, co-owner of two East of Chicago shops in Canton.

If pizza eaters are still indecisive after devouring countless slices and making sure toppings are fresh, tasty, and plentiful, they can always measure up vendors' personalities. Cricks, who sports a toothy smile and tattoos up each forearm, spends half his day entertaining his customers, as well as stuffing their (pizza) pie holes. "People bring their kids in here just because I make 'em laugh," Cricks says.

"So while you're waiting for your pizza, I can, like, be humorous for you."