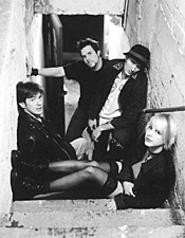 The Mutilators, the fictional group that plays real punk rock.
The Mutilators -- the rock band at the center of the play Loud Americans: A Punk Saga -- live up to their name, shredding every single song and always being on the verge of imploding. But their persistence, in hopes that their big break lurks just around the corner, echoes the story of every single rock-and-roll band that's ever plugged in. That's sort of the point, says co-writer and director Christopher Johnston.

"I wanted to draw from a lot of things," he says. "I read about a lot of punk bands for research. But it's really about tapping into a part of our lives that's rebellious. I hope this is comforting and healing to people who feel disenfranchised."

Loud Americans premieres Friday as part of Dobama Theatre's youth-skewing Night Kitchen series. It's partially inspired by the exploits of Johnston's brother, Steve, a vet of several minimally successful Los Angeles bands. "Some of this is definitely based on his experiences," says Johnston, 47, who also tapped his own memory for the punk concerts he saw during the '80s, when he lived in New York. "It's a serious play, and the music adds a whole other layer to it."

The show's story -- an ambitious new guitarist hopes to steer the band in a more lucrative direction -- is just a springboard for the music: 12 original tunes, written by Johnston and Greg Vovos. "It's a play with music," Johnston explains. "No one breaks out in song in the middle of the play. It's not a traditional musical."

But the fictional Mutilators do rock. The live combo onstage is "a shadow band," Johnston says. Actors do the acting, but when it comes time to perform, a group made up of local musicians (including Johnston's brother, Steve) plugs in and cranks up the amps. Think of old-school Stooges crossed with Class of '03 graduates the Distillers -- a "classic punk sound."

Like his feisty protagonist, Johnston wants to take Loud Americans out of the theater and into other venues. The Mutilators played a gig at the Grog Shop last week, and their CD is being sold at local record stores. "The plan is to give the [discs to Loud Americans attendees] as souvenirs of the show," Johnston says.

It's a rock-and-roll fable with real-life issues relating to integrity, loyalty, and determination. The kids at the center of it are relatable, likable, and perceptive. And that's what Johnston hopes will click with audiences. "Punk is so part of this area," he says. "And this isn't something people are normally going to see in a theater production. I know Hedwig and the Angry Inch got a lot of attention, but this is something different.

"We're presenting something for a younger audience. But at the same time, a lot of us grew up with that music, and we have punk in our lives, too."