Out in Akron celebrates the lifestyle. 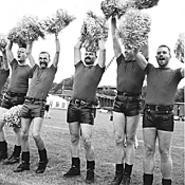 Out in Akron isn't about peeking out of the closet. It's about kicking down the door, with three days of concerts, drag shows, and movies celebrating the Rubber City's gay and lesbian community.

The "outing" starts at 7 p.m. Friday with the free Queer Shorts Film Festival at the University of Akron's Schrank Hall (at the corner of Exchange and Grant streets). The independent flicks "take pride in the diversity of queer experience," says coordinator Terry Bates. Out in Akron continues Saturday -- national Coming Out Day -- with a 7 p.m. performance by lesbo-folkie Diedre McCalla at the John S. Knight Convention Center (77 East Main Street; tickets are $15 to $18).

The festivities wrap up Sunday, beginning at 11 a.m. at Greystone Hall (103 South High Street) with an $18-a-plate brunch with Congressman Sherrod Brown. At 2 p.m. is The Sissy Show, a musical about cross-dressing; afterward, a group of transvestites talks about life in dresses and high heels (tickets are $10). A free drag show, Cabaret Q, finishes off the weekend in the Greystone auditorium at 7 p.m. Call 330-253-2220 for more information. -- Cris Glaser

Despite the name, dogs aren't allowed at Saturday's Clam Bark at the Cuyahoga County Fairgrounds. So what is the canine connection? The clambake is a benefit for the Cleveland Animal Protective League. And for your clams, you get more than just shelled eats: Chicken, vegetables, and beverages (alcoholic and non-alcoholic) are offered, as well as a music performance by Pop Gun. Raffles (for a trip to the Canary Islands, among other things) and auctions will take place throughout the Bark, and the Animal Protective League's mobile adoption unit will offer dogs, cats, rabbits, and chinchillas. "We hope to find homes for lots of pets," says the Animal Protective League's Susan Ross. The Clam Bark happens from 4 to 10 p.m. at the Cuyahoga County Fairgrounds (164 Eastland Road in Berea). Tickets range from $10 to $45 and are available by calling 216-771-4616. -- Allen Miller

Michael Hogan's debut novel, Man Out of Time, is none too subtle about its narrator's lack of identity. He's an insecure fellow without a name, a boozing attorney who's made few decisions in life. He does join AA, though. "He's run out of alternatives," says Hogan, a Cleveland resident. "If someone had invited him to a party, he'd be going there instead." Critical of everyone around him, including his associates, the unnamed protagonist is in limbo between college and adulthood. It's a modern-day dilemma, Hogan says. "He's in a position where education outstripped maturity." Hogan is at Borders Books & Music (30121 Detroit Road in Westlake) at 2 p.m. Saturday. Admission is free; call 440-892-7667. -- Melody Caraballo

The Animation Show sure beats Saturday-morning cartoons over a bowl of Fruit Loops. The annual event features a dozen shorts by Don Hertzfeldt and Mike Judge, including Judge's pre-Beavis & Butt-head pencil tests. The Animation Show shows at 9:30 p.m. Friday, 7:30 p.m. Saturday, and 8:50 p.m. Sunday at the Cleveland Cinematheque, 11141 East Boulevard. Tickets are $7, $5 for members. Call 216-421-7450 for more information. -- Cris Glaser