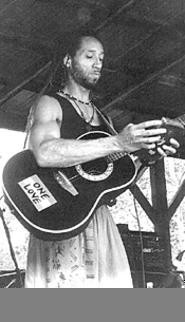 Carlos Jones remembers the summer night in 1978 when he saw Bob Marley play at the Music Hall. The concert "snagged" him on reggae music. Soon after, he was checking out local reggae gods I-Tal at the old Coach House club, where he was asked to sit in from time to time. Before he knew it, he was a bona fide member of the group.

A quarter-century and several bands later, Jones still plays his Jamaican-tinged "raggedy stuff" in Cleveland just about every weekend, at clubs like the Barking Spider and the Beachland. Wherever he jams, he's usually playing the good Samaritan too. On May 11, he organized and headlined a benefit show at Peabody's for the Province of Grace Halfway House, which serves low-income women and children on Cleveland's East Side. "The ladies are very earnest about what they are trying to provide, and as it turns out, they're right in the middle of the 'hood, with no big fancy building or even a sign," he says.

In March, Carlos Jones & the P.L.U.S. Band's song "Torchbearer" was included on the 2003 Acoustic Rainbow Radio Sampler from Kentucky-based PoetMan. The tune is now getting airplay on 1,500 national radio stations that program independent music. "Many loyal fans show us love and support," he says. "I've been blessed and feel good." So do his fans. Carlos Jones & the P.L.U.S. Band play at 9 p.m. Sunday at the Barking Spider, 11310 Juniper Road. Admission is free; call 216-421-2863. -- Cris Glaser

Nails in the Coffin

The Son is the story of a carpenter who takes on an apprentice -- who just happens to be the kid who killed his son five years earlier. It's a deliberately paced tale of obsession and closure -- and a fitting companion to the similarly themed In the Bedroom, without that film's jarring third act. And as Bedroom did, The Son garnered tons of acting awards (including Best Actor for Olivier Gourmet, as the grieving father, at Cannes last year). It shows at 7:30 p.m. Friday, 9:25 p.m. Saturday, and 9:10 p.m. Sunday at the Cinematheque (11141 East Boulevard). Admission is $7, $5 for members; call 216-421-7450. -- Michael Gallucci

Call It a Comeback

Living Colour's Time's Up was one of the finest hard-rock albums of the '90s, a solid and more pummeling version of the funky metal the band pioneered on its 1988 debut, Vivid. After a decade of pursuing other projects -- singer Corey Glover spent time as a VH1 host -- the quartet is back together, with a new album due in September. Glover, Hendrixian guitarist Vernon Reid, Will Calhoun, and Doug Wimbish are on the road, working out new material and playing old favorites. They're at the Agora (5000 Euclid Avenue) Sunday at 9 p.m. Tickets are $22.50 and $25. Call 216-241-5555 for more information. -- Michael Gallucci

What the Cabbie Saw

Hellcab (right) is the story of a taxi driver whisking passengers -- drunk women, horny couples -- from place to place. "Through the course of a 14-hour workday, he is exposed to everything and anything," says director Brint Learned. "When I first read the play, I thought it was a little absurd. But when I talked to the actor who plays the cab driver, who actually drove a cab for 10 years, he said, This is mild. This has all happened to me.'" Hellcab is at the Fine Arts Association's Shadowbox Theatre, 38660 Mentor Avenue in Willoughby at 8 p.m. Friday and Saturday. Tickets are $14 and $15; call 440-951-6637. -- Michael Gallucci