Reunited and It Feels So Good 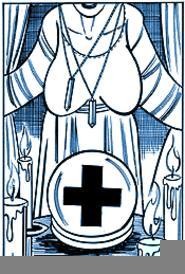 When people say they can talk to ghosts, it's pretty easy to pass them off as insane or some kind of freak under the delusions of new-age propaganda. Reverend Jenni Brangle, a Spiritualist minister, medium, and healer who is hosting the Full Moon Metaphysical Expo in Chesterland on Thursday, knows this only too well.

"When my husband died, I began hearing from him," Brangle recalls. "I really thought this was absolute nonsense, and I must be losing my mind. Then I did some research and realized everybody has this ability -- it just takes fine-tuning."

Brangle, who no longer believes in death, just life "in another form," opted to fine-tune her latent ability to commune with the physically dead and enrolled in the School of Spiritual Healing and Prophecy in Lilydale, New York. She completed a three-year course that left her an ordained Spiritualist minister.

"Spiritualism is an organized religion," she explains of the title. "A Spiritualist is one who believes that communication after death is possible and is a normal part of life. But I am licensed in Ohio to perform marriages and funeral services and anything any minister could do."

But for Brangle, Spiritualism was just a scratch in the surface of the netherworld between the physical sciences and metaphysical -- commonly called supernatural or psychic -- experiences. "One thing will lead to another," she agrees. "The picture is so big. It's such a feeling of awe and wonderment, once you begin to see the bigger picture."

It is this bigger world she wishes to share with others through the metaphysical expo. Having been born and raised in Geauga County, she knows firsthand that such "psychic fairs" are nonexistent in the area. "I believe it's lacking in Geauga County. I'd like to bring it together and let people know who we are and where we are and that we're not that hard to find." To that end, she has gathered 14 different types of readers -- who use crystal balls, palms, tarot cards, astrology, and the like -- and "psychic mediums" such as herself, as well as healers, vendors, and speakers, under one roof.

Brangle, not being affiliated with any Spiritualist church in the area, also found reaching out on a more personal level a tad difficult, and for this she adopted a 21st-century solution: the Internet. It's a practice she doesn't see as antithetical to the matters at hand.

"I think we could advance so much further as a society if we learned to use technology and the science that we have, and the unknown, and use them together," she explains. "With the training I have received, I do not have to see a person directly in order to connect and get messages for them. It's a vibration level." In short, Brangle uses the phone lines to get a name, and then it's purely astral. She raises her "vibration level," while the spirit she is trying to contact lowers its own, higher level. It is in this middle ground that communication can occur.

"The chatroom readings are a little less intense," she admits. "They're effective, just not as in-depth. It was a way for me to use my talents and to use my ministry and be able to help people. It's working out quite wonderfully for me."

Brangle also hopes the expo will increase her -- and her fellow mediums' -- ability to help people. "It gives me great joy to bring someone's loved one to them," she says. "There is more to life than what we physically see and are used to as our reality. I'd like people to get a taste. There is so much more out there."

The hardest part, of course, is finding it.