A well-meaning play about civil rights gets tangled in talking. 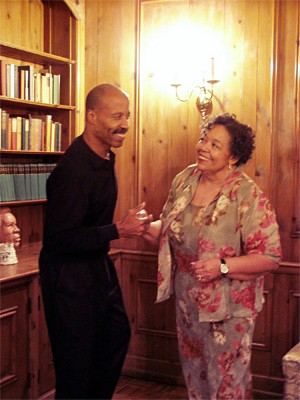 Commissioner Peter Lawson Jones and Joyce Meadows in Bourbon at the Border.

In the early summer of 1964, less than 7 percent of voting-age blacks in Mississippi were registered to vote. Four decades later, a black man is a front-runner in the race to become president. Some of the credit for that change goes to 1964's "Freedom Summer" — an effort to register black voters in arguably the most virulently racist state in the nation: Mississippi. And that famed civil-rights effort is the event that shapes Bourbon at the Border, now being produced by Ensemble Theatre in collaboration with Karamu House.

Set in 1990s Detroit, this ambitious play by Pearl Cleage explores the effects that Freedom Summer had on its participants. Even though most of the 1,000 workers who signed on for hazardous duty in the Magnolia State were white, this script focuses on two fictional blacks, Charlie and Rosa, who went south that year and experienced the full brunt of the rabid, redneck backlash.

This is an accurate premise; the black civil-rights workers always seemed to enrage the racist yahoos more than their white counterparts. But only a bit of this history is dealt with in Cleage's first act, and that restraint, which could be admirable in a different play, works to the detriment of this production.

During the almost 90 minutes before intermission, the playwright slowly introduces us to quiet, sixtysomething May and her apartment-house pal Rosa, a snappy, slightly younger soul sister with a fast mouth. We soon learn that May's husband, Charlie, has been in a mental institution for depression, a long-standing ailment triggered by the horrific events of that summer.

He has recently been released and soon arrives at May's home. There, Rosa regales May and Charlie with stories about her current squeeze, Tyrone, her attempt to be a phone-sex operator, and her inability to tell corny jokes. May responds by sharing her and Charlie's dream of someday living in the Canadian woods. Eventually, all this small talk engineered by the playwright gets so minuscule, the serious issues Charlie and May are dealing with become submerged in prattle. Also, a seemingly disconnected subplot is introduced, involving news reports of a couple of dead bodies found in the neighborhood — older white men who were viciously killed, but not robbed.

Something actually happens in the second act, when Charlie is fired from the job Tyrone helped him secure. This trauma triggers a flashback by May, during which she relives being brutalized at the hands of a Mississippi sheriff and his mouth-breathing deputies. The act is then wrapped up in a flurry that includes an unbelievable twist and some corny daydreaming about the up-north cabin.

Given the meandering script, the four actors acquit themselves remarkably. Joyce Meadows is entirely credible as May, and she delivers a shattering monologue, declaring about her time in the south, "Everybody wants to know how brave you were, but nobody wants to hear how scared you were." As Charlie, Abdullah Bey has the right mix of heavily medicated calm and an undercurrent of smoldering rage. In the frequently comical role of Tyrone, Peter Lawson Jones — a Cuyahoga County Commissioner by day — is as smooth as a long sip of Jack Daniels Black, which he totes everywhere he goes. Stephanie Stovall brings plenty of fun to her effervescent portrayal of Rosa, but she needs to dial back some of the stage business (she powders her face more than Tammy Faye Bakker) and screech a bit less often.

Director Terrence Spivey drives the pace as well as he can, but there are so many squishy and undramatic sequences that even his hyperactive blocking can't cover up the flaccid writing. And while curtain calls aren't crucial to any production's success, it must be mentioned that this remarkably haphazard series of bows is capped by the cast assuming a frozen, smiley pose that is passing strange.

There are no doubt great stories to be told about Freedom Summer, but this one takes too long to get to the heart of the matter.