Romantic turmoil simmers in The Break Up Notebook: The Lesbian Musical, at The Beck Center 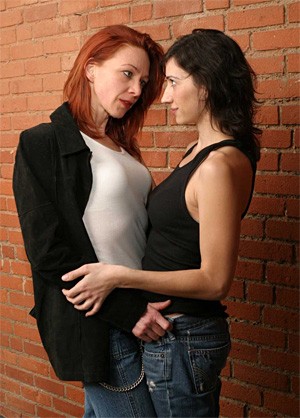 It's been said that trying to forget someone you love is like trying to remember someone you never knew. And that is the heartrending impossibility at the core of The Break Up Notebook: The Lesbian Musical, now at the Beck Center.

The book by Patricia Cotter sketches out a fairly typical post-relationship dating arc (gay or straight; only the names of the bars change), with music and lyrics by Lori Scarlett and additional music by David Manning. Studded with interesting performances and a few intriguing pop and rock numbers (and one insufferable clunker), this energetic production is hampered by an overly loud orchestra that obscures some of the witty wordplay.

Thirtysomething Helen is the dumpee, left alone in her Los Angeles bedroom, wearing the dress of her departed lover of two-plus years. She is soon joined by a predictable support network consisting of her gay co-worker Bob and a butch-femme couple, Monica and Joanie, who are on their way to a commitment ceremony.

Helen works her way through a quick series of failed dating encounters, including a recovering-addict line-dance instructor (a "12-stepping two-stepper"), until she finally meets Frances. This quiet motorcycle chick, the roommate of a sexual powerhouse named Casey who almost blows Helen's doors off on a lousy first date, attracts Helen in a most compelling way.

In the demanding role of Helen, the vocally strong Jodi Dominick is loose and endearingly gawky. Although her attempts at wry humor seem forced early on, she relaxes into her role and manages to create a sympathetic character. She does this with a script that offers few insights into the kind of person Helen is, apart from her desire to hook up.

The most riveting person onstage is Tracee Patterson, who imbues Frances with such a smoldering sexual intensity, it seems she might spontaneously combust at any moment. When she saunters up to Helen, it's as if a cougar is approaching a defenseless lamb.

Also excellent are Eric Van Baars as swishy Bob, Kayce Cummings as Casey and the "other woman," and Alison Garrigan as uptight, Paxil-popping gal pal Sheila. But as good as she is, even Garrigan can't save the show's worst tune, "Polynesian Dance," a supposedly comic ditty that lumbers on forever without triggering a chuckle.

Similarly, the play itself is too long, but it's worth the wait, since the last two songs, "Lucky, Lucky Me" and "Do It All Again" are tender, touching, and the best of the bunch. With some judicious editing in the middle and a dialed-down band, Notebook could be a gem.