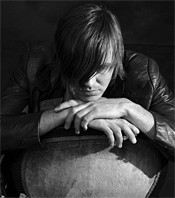 Music and emotion tend to work well together. Akron singer-songwriter Nathan Hedges should know, since he crafted his ballad, "Rain," during a tough time in his life. "I had no direction, and I didn't really know what I was going to do," he says. "I ended up writing that song. Then it turned into this whole project." The work resulted in the 2006 release of his self-titled CD, which also features catchy originals like "It's Alright" and "Waiting," both of which you'll hear in concert tonight, when he and the Imports open in Lakewood for rockers View From Everest. "We usually have a pretty high-NRG crowd," says Hedges. "They move around." That's cool with him, but it's even better when the audience can relate to his tunes about everyday life. "Most of the time, I write the music first. Then, depending on the way the music makes me feel the chord progressions, that conveys a mood," says Hedges. "You can hear the way a song starts, and you can get a vibe of how that song makes you feel." Hedges takes the mic at 9 tonight at the Hi-Fi Concert Club, 11729 Detroit Avenue in Lakewood. Admission is $5. Call 216-521-8878.
Sat., Feb. 16, 9 p.m., 2008