Send a News Tip
Sincerity Forever Presented by Convergence-Continuum at The Liminis, 2438 Scranton Road Through June 7, 216-687-0074. 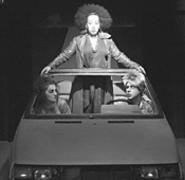 For rule-free theater, Convergence-Continuum is your troupe.

Rules suck. Ever since our second-grade teacher told us to color inside the lines, most of us wanted to take a red crayon, scrawl all over the page, and then draw a long line off the page, across the desk, and out into the world, where rules didn't matter (we thought). Then we hit third grade and did as we were told without complaint. There are some adults, however, who continue to flout the rules of accepted behavior in their field and follow their most visceral instincts. Playwright Mac Wellman is such a person, and his 1990 Obie-winning play Sincerity Forever, now presented by the Convergence-Continuum group, perfectly demonstrates both the delights and frustrations of this id-driven creative approach.

For Wellman, conventional syntactic structure is no more confining than gravity is to the special-effects wizards behind the Matrix flicks. Throughout his play, Wellman twirls phrases to see them sparkle in the lights, and he has characters spew lists of adjectives like a magician pulling an improbably long string of ping-pong balls out of his mouth. There is meaning behind all these verbal gymnastics, but those meanings mutate continually, so that you can never quite put your finger on the real message. In short, this is word jazz of the highest order, and asking it to be easily decipherable would be as offensive as asking pianist Thelonious Monk to pick a damn melody and stick to it already.

The play starts on a chuckle, with the Moody Blues crooning "Knights in White Satin," as we see two young women (Lara Mielcarek and Amy Bistok) draped in full Ku Klux Klan regalia and sitting in a beater convertible. Their oblique conversation deals largely with their self-confessed ignorance about all things ("Why'd God make the world so complicated?") and their firm reliance on devout sincerity to guide their actions. Just when you think playwright Wellman will make a telling point about the absolutist, fundamental religious mindset, embodied in nearly all its aspects by the KKK, he veers off into other unrelated territory. That's one of the frustrating parts of this omnidirectional farce.

It turns out we're in the hick town of Hillsbottom, where apparently everyone is white, wears white robes, and is fearfully alienated from each other, not to mention from themselves. As more Klansmen are introduced, their shared community fears expand into new areas: the weird growths that people who live down by the nuclear plant are getting on their bodies, the promised torments waiting for them in hell, the puerile anxieties of high school dating, and the malevolent, obscenity-obsessed "mystic furballs" who seem to control everyone's fate. Along the way, Wellman launches some cute laugh lines at the expense of these easy targets ("If the English language was good enough for Jesus, it's good enough for me!") and performs a number of linguistic tricks. This is capped by having different pairings of characters recite identical dialogue segments, an initially diverting gimmick that soon becomes ponderous. Another drawback is that the true ugliness of the KKK is never addressed, which allows these yammering yokels to become almost cuddly.

Once the yahoo infighting hits a fever pitch, Jesus H. Christ comes to town, as an African American woman, and lays down the law in a hellfire homily directed to this "sleazy, lying bunch of dickheads" who have been putting words in Her mouth for so long. In Her florid Sermon on the Heap, She tells Her flock to shove their sincerity up their tailpipes and that, by the way, She couldn't care less who sleeps with whom.

The nine young players in the Convergence-Continuum ensemble infuse Wellman's randomly targeted satire with explosive energy. And when the playwright occasionally slows his manic spate of words, the actors also show an ability for understatement. Nina Domingue is a standout, playing Jesus with clear-eyed outrage and a street-trained smart mouth. Her final diatribe is an anti-conventional-religion gem, a revival meeting for those born just once and happy about it. The four male Klansmen are aptly rendered, with varying degrees of low IQ, by Geoff Knox, Brian Breth, Cliff Bailey, and Geoff Hoffmann. Director Clyde Simon delivers a powerful theatrical experience while doing his best to move his actors around the small Liminis theater space.

When you abandon rules on stage (regarding plot, character, etc.), the production can easily devolve into a pointless exercise. And that is certainly how this production may strike those with a passion for traditional form. But for those who like to get loose with their crayons, there are many pleasures awaiting in Sincerity Forever.